Israel continues to pound Gaza as world urges for truce 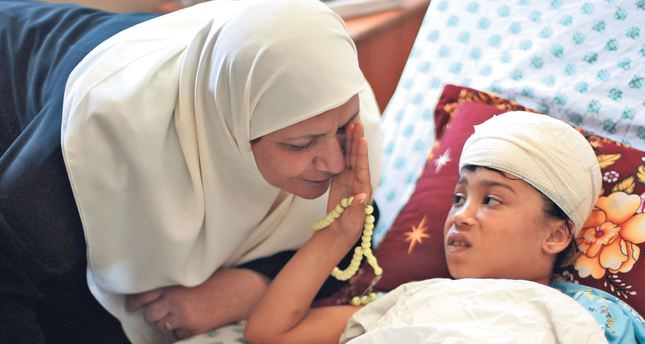 Israel has held off on ground operation in Gaza but continued to severely pound the Gaza Strip, which has left 172 Palestinian dead, while ignoring international pressure for an immediate Hamas- Israel truce

Deadly Israeli airstrikes have continued to pound the besieged Gaza Strip, home to around 1.8 million Palestinians, destroying hundreds of homes and killing more than 172 Palestinians.

The Israeli army yesterday stated that a Hamas drone was shot down over the coastal city of Ashdod, holding Hamas responsible for the drone that entered Israeli airspace. "An aerial drone from Gaza infiltrated Israel a short time ago. [Israeli Defense Forces] IDF forces shot it down with a Patriot missile above Ashdod," the Israeli army stated on its official Twitter account. Anadolu Agency (AA) reported that Hamas' armed group, called The Ezzeddin al-Qassam Brigades, claimed responsibility by saying they aim to "carry out special missions in Israel."

As the tension escalates between the two sides, Israel put a hold on a planned ground operation. According to reports, Israeli ministers have decided to hold off the ground operation on Sunday evening following a meeting of the security cabinet. After preparations for a possible ground attack, Israeli commandos reportedly made their first ground incursion in Gaza on Sunday, in addition to a series of heavy Israeli airstrikes.
While ground troops remain amassed on the borders in advance of a possible ground assault, Israeli warplanes reportedly pounded more than 40 sites in the Gaza Strip on Sunday night, hitting three training facilities used by Hamas' armed group that left two people dead, according to the Agence France-Presse (AFP) news agency. In a separate development, Israel has continued its "wide detention campaign," detaining 18 Palestinians in the West Bank, a local NGO stated.

Among the detainees, Abdel Sattar Qassem, a professor and author of numerous publications on Palestinian history and Islamic thought, have been under detention since yesterday. This campaign of detention in the West Bank was launched after three Jewish teens went missing on June 12.
Due to a growing number of Palestinian civilians among the dead, Palestinian Authority (PA) President Mahmoud Abbas attended an emergency meeting of Arab foreign ministers in Cairo in order to discuss international efforts to end the bloodshed. Abbas urged the U.N. to seek international protection for Palestinian civilians who are threatened by Israel's deadly offensive in the Gaza Strip. The Arab League meeting was held amid international efforts to put an end to the Israel-Hamas conflict. "At the Arab foreign ministers' meeting ... the State of Palestine will ask all parties present to adopt a draft resolution at the ministerial level to be presented at the next U.N. Security Council meeting and to follow-up on this matter accordingly at the U.N.," said the Palestine Liberation Organization in a statement, AFP reported.

As part of international efforts for an Israel-Hamas truce, U.N. Secretary-General Ban Ki-moon urged both sides to ease the tension regarding the situation between Israel and Palestine since it appears to be worsening, according to a statement released Sunday by Ban Kİ-moon's spokesman. "He strongly believes that it is in the interest of both sides that steps toward dangerous escalation be replaced with immediate measures to end the fighting, thus preventing further casualties and greater risks to regional peace and security," said Ban Kİ-moon's spokesman, recalling the November 2012 ceasefire agreement.

In addition to the U.N. calling for a ceasefire agreement, international pressure from various countries has been urging Israel to stop its deadly attacks.

Jordan's King Abdullah II, yesterday urged Israel to stop targeting civilians in a telephone call with the U.N. chief. The EU also pressed for an immediate ceasefire in Gaza: "We call on all sides to exercise maximum restraint, to avoid casualties and to return calm. We are in contact with parties in the region to do their utmost to achieve an immediate ceasefire," EU foreign policy spokeswoman Maja Kocijancic said in a press conference, according to Reuters.

According to an Israeli army statement yesterday, Israel has hit 1,470 targets in the Gaza Strip since the military campaign dubbed the Operation Protective Edge, was launched against the Palestinian enclave. In the statement, among the targets were, "770 rocket launch pads, 210 tunnels, 69 training camps and 63 rocket storage and production facilities among others," AA reported.

As the situation deteriorates in Gaza, the Gaza-based Palestinian Centre for Human Rights announced that "more than three-quarters of the victims were civilians." As the toll in Gaza hit 172, mostly civilians, at least 10,000 Gazans reportedly fled their homes in northern Gaza to U.N. Works and Reliefs Agency schools.
Last Update: Jul 15, 2014 2:09 pm
RELATED TOPICS