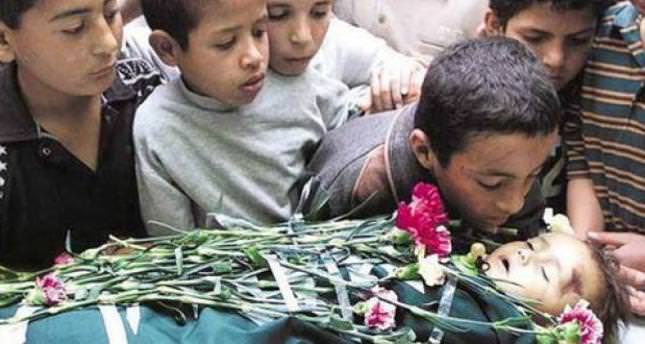 by Daily Sabah Jul 15, 2014 12:00 am
Israel's heavy bombardment of densely populated Gaza Strip has put many Palestinians at risk, especially Palestinian children. They have become the victims of worsening violence in Gaza as the number of Palestinians dead in the deadly Israeli airstrikes, continues to increase. More Palestinian children injured by Israeli attacks have been taken to hospitals in the besieged Gaza Strip, according to medical sources who told Press TV, Iran's television network.

The death toll has risen to 173 with more than 1,270 injured. The United Nations Office for the Coordination of Humanitarian Affairs estimated that as many as 80 percent of those killed during the attacks have been civilians. Among them, at least 33 children killed in Gaza since the Israeli military campaign was launched last Monday, according to the latest reports.

"No child should have to suffer the terrifying impact of such violence," said UNICEF, Children's Rights and Emergency Relief Organization Executive Director Anthony Lake, in a statement released on Sunday stressing a further escalation in violence and its impact on children suffering from the ongoing violence.

"The violence is taking a shocking toll on children both physically and psychologically, with alarming consequences for future chances of peace, stability and understanding. Too often children who witness such violence, and come to view it as "normal," are likely to repeat it themselves in later life," said UNICEF Director.