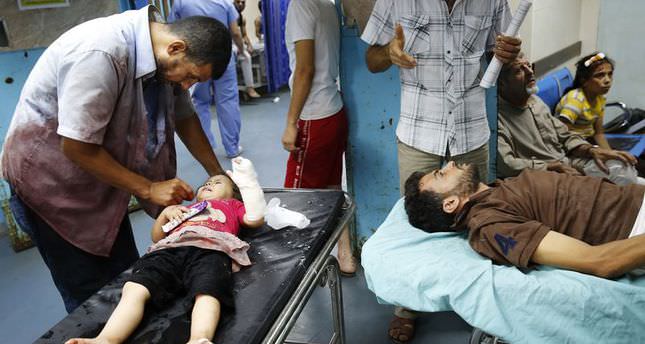 by AA Jul 18, 2014 12:00 am
A total of 279 Palestinians have been killed and 1980 injured in the ongoing Israeli onslaught against the blockaded Gaza Strip, according to a Palestinian Health Ministry official.

"Rescue workers have retrieved the bodies of ten victims from under the rubble of their homes in the southern Gaza Strip cities of Khan Yunis and Rafah," Health Ministry spokesman Ashraf al-Qodra told Anadolu Agency.

He said the Palestinians were killed in Israeli attacks during the early hours of Friday.

On Thursday, the Israeli army launched a ground operation against the besieged Gaza Strip following eleven days of relentless airstrikes with the ostensible aim of halting rocket fire from the Palestinian territory.

Gaza-based resistance factions, for their part, have continued to fire rockets at Israel-some of which have reached Tel Aviv.