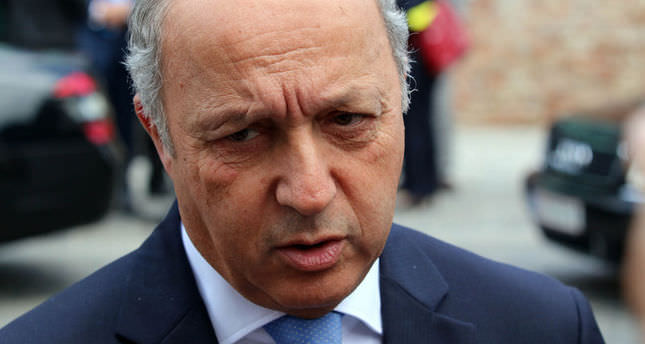 by AA Jul 18, 2014 12:00 am
French Foreign Minister Laurent Fabius arrived in Cairo on Friday to discuss an Egyptian proposal for a ceasefire between Palestinian resistance factions and Israel amid the latter's ongoing offensive against the Gaza Strip, a diplomatic source has said.

Fabius, who will only spend a few hours in Cairo before heading to Israel, met with Palestinian Authority President Mahmoud Abbas at Cairo International Airport, according to airport sources.

France had earlier expressed support for an Egyptian proposal for a ceasefire between Gaza-based resistance factions and Israel.
On July 7, Israel launched a major military offensive on the Gaza Strip. On Thursday night, it stepped up its offensive to include ground operations inside the embattled coastal enclave.

Egypt issued its ceasefire proposal earlier this week. While Israel initially accepted the plan, it was rejected by Hamas and Islamic Jihad, which said they had never been consulted to discuss the plan's terms.

The two groups also asserted that the Egyptian initiative failed to address core demands of the Palestinian resistance.

At least 264 Palestinians have been killed-and over 1860 injured, many seriously-in unrelenting Israeli airstrikes on the blockaded Gaza Strip since the operation began early last week, according to health officials in Gaza.

Gaza-based resistance factions, for their part, have continued to lob rockets at Israel-some of which have reached Tel Aviv-in response to the deadly airstrikes.

Since hostilities began, only one Israeli has been killed by rocket fire from Gaza.