The two sides in Gaza make a 5-hour long truce 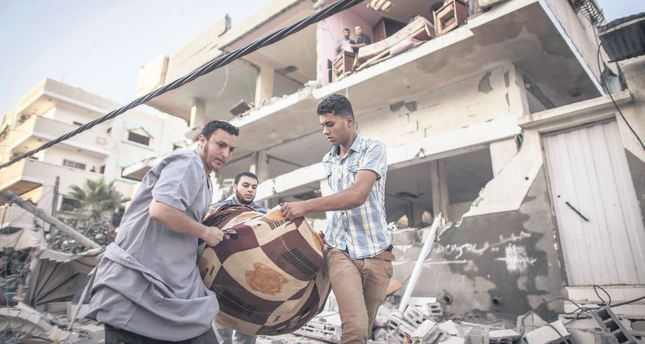 A five hour-long truce was agreed in Gaza yesterday as hospitals were running out of medical supplies and the number of people wounded reached 1,700. Obama also said the U.S. is ready for working towards a permanent peace

Israel and Hamas agreed to a fivehour cease-fire yesterday to allow the U.N. to deliver humanitarian aid to the Gaza Strip. Immediately before the truce started a series of Israeli strikes killed three people and Israel claimed that Hamas fired three rockets during the cease-fire. Hospitals in Gaza are running out of medical equipment and need water, said Red Crescent officials. It was previously reported that the hospitals were at capacity and doctors didn't have access to adequate medical supplies. Israel also announced they thwarted an attempt from Gaza to infiltrate southern Israel through a tunnel.

Al-Qassam Brigades, the military wing of Hamas, has claimed responsibility for the infiltration. "All members returned safely," it said in a statement.
Israel threatened Gazans with attacking despite the truce in case of armed activity during the truce .

U.S. President Barack Obama said on Wednesday he was heartbroken over the civilian deaths in both Israel and Gaza and called on the two sides to make a ceasefire as soon as possible. He stated that he will support the ceasefire by any means. "We will use all of our diplomatic resources and relationships to support efforts of closing a ceasefire deal," Obama added. "As I have said repeatedly, Israel has a right to defend itself from rocket attacks that terrorize the Israeli people. There is no country on earth that can be expected to live under a daily barrage of rockets.

The Israeli people and the Palestinian people don't want to live like this," Obama said.Contrary to Obama's statements former U.S. President Bill Clinton said Israel isolates itself from world opinion due to the repeated conflicts. Clinton's words came after the killing of four children playing on a Gazan beach, an Israeli strike which has ignited more anger against Israel.

Touching on the murder of the four children, Israeli Economics Minister Naftali Bennett said on Wednesday "I think it is terrible that Hamas is butchering its own children like this. I would never take my children and place them next to rocket missile launchers." He stated that "Hamas is conducting massive self-genocide, taking women and children and placing them next to missile launchers." Yet, the photos released by a New York Times photographer reveal that Israeli Defense Forces directly targeted the kids. Israeli Foreign Minister Avigdor Lieberman said yesterday no permanent ceasefire was reached and the ceasefire is far from reality.

On Tuesday, Egypt made a ceasefire proposal to the two sides. Yet, Hamas did not accept the proposal claiming that they did not even obtain the full paper. In the following hours Israel intensified their bombardment. Israel has been attacking Gaza for more than a week, striking dozens of targets.

The confirmed death toll of Palestinians hit 230, many of them civilians, with 1,700 injured, according to a statement from the Gaza Health Ministry. More than 75 percent of the dead have been civilians and more than a quarter has been children, according to a U.N. Relief and Works Agency for Palestine Refugees report.
Last Update: Jul 18, 2014 11:24 am
RELATED TOPICS