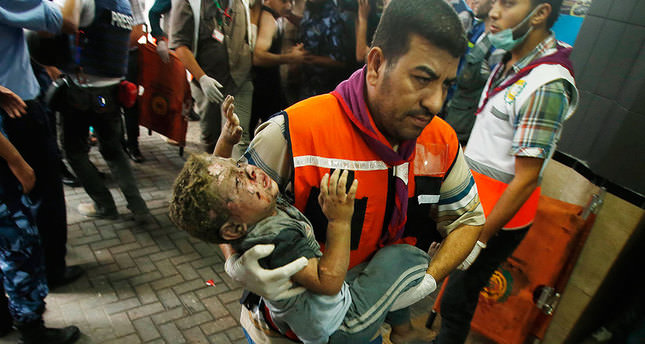 by Anadolu Agency Jul 19, 2014 12:00 am
The Gaza death toll hit 348 on Saturday as Israeli warplanes intensified their bombardment and troops pressed a ground assault on the 13th day of a major confrontation with Hamas.

And the overall Israeli death toll rose to nine following violence in which six soldiers and a civilian were killed, the army and police said.

The latest incident in Gaza saw one man killed in an air strike on the northern town of Jabaliya shortly after two were killed in a strike near Deir al-Balah in central Gaza, emergency services spokesman Ashraf al-Qudra said.

And another two people were killed in Zeitun, east of Gaza City, raising the number of Palestinians killed on Saturday to 46.

In southern Israel, six soldiers were killed when a group of Hamas fighters got under the border fence and fired machineguns and an anti-tank missile at an army patrol.

Troops returned fire killing one of the fighters in an attack claimed by Hamas.

Among those killed in Gaza were five members of the same family, including a 6-year-old and a 2-year-old, who died in a strike on a house in the northern town of Beit Hanun, Qudra said.

Earlier, Qudra also reported five bodies had been pulled from a home hit by an Israeli air strike in Khan Yunis.

78 children and 28 women were among those killed in the Israeli assault.

Since July 7, Israel has been pounding the Gaza Strip, home to some 1.8 million Palestinians, with crippling air and naval bombardments with the ostensible aim of halting rocket fire emanating from the strip.

On Thursday night, Israel stepped up its offensive to include ground operations, sending troops into the embattled coastal enclave.