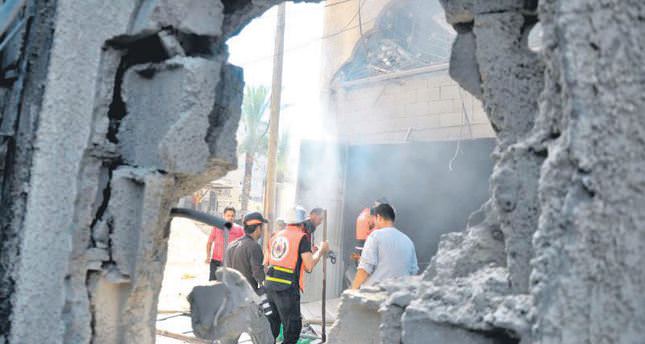 A group of Israelis are discontent with the slaughter of Palestinian people, which started 12 days ago by Israeli military forces. The 'Jews against Genocide' group spoke to Anadolu Agency about their stance towards what is going on in Palestine.

Ofer Neiman and a group of like-minded Israelis are not only pained by the ongoing Israeli onslaught against the blockaded Gaza Strip, but also by what they describe as Israel's "apartheid" policies against the "oppressed" Palestinian people. "I feel my government is murdering children using my money and claiming to do it in my name, which is totally unacceptable," 42-year-old Neiman, a member of the "Jews against Genocide" group, told Anadolu Agency (AA) outside an east Jerusalem hotel. At least 222 Palestinians, including dozens of women and children, have been killed in unrelenting Israeli airstrikes on the besieged Gaza Strip since July 7. The Israeli assault, which is ostensibly aimed at halting rocket fire from Gaza, has completely destroyed more than 600 housing units in the besieged coastal enclave and partially damaged almost 1,635 others.

Gaza-based resistance factions, meanwhile, have continued to fire rockets at Israel in response - some of which have reached Tel Aviv. Since hostilities began early last week, one Israeli has been killed as a result of rocket fire from Gaza. Palestinian resistance factions, including Hamas and Islamic Jihad, have officially rejected an Egyptian ceasefire proposal that was accepted by Israel. But Nurit Peled-Elhaman, an Israeli professor of education and member of the "Jews against Genocide" group, said that portraying Gazans as having rejected Egypt's ceasefire proposal was just manipulation. "The ceasefire means the previous situation will return, albeit much worse, because Gaza has been destroyed now and nobody will help rebuild it," she told AA. "Entire families are dead, there are a lot of orphans, hospitals are damaged," she added. She says Gazans should insist on the lifting of the long-running Israeli siege on the territory and demand their right to a normal life. "It should be much more than a mere ceasefire," she said. She went on to describe rockets fired from Gaza at Israel as a relatively trivial response to Israel's "oppression and aggression." "When you paralyze people's lives, when you put them under siege for so many years, when you deprive them of food and medication and education and movement, this is the least they can do ... to attract the word's attention that they even exist," she said. "There is an oppressor and an oppressed who from time to time responds like mosquito bites," she said, referring to Palestinian rocket fire in response to unrelenting Israeli attacks.

Apartheid Israel - Israel's ongoing military operation, dubbed "Operation Protective Edge," is the third major offensive operation against the blockaded Gaza Strip - home to some 1.8 million Palestinians - in the last six years. But Neiman and other members of "Jews against Genocide" believe the problem is much greater than just one more Israeli army offensive. "We don't have enough activists here who can counter the Israeli apartheid regime," he said. "That's why we need support from the outside world." "Jews against Genocide" is an international group with many Israeli-Jewish members opposed to Israeli policies against Palestinians, which they see as "genocide." "We, as concerned Israeli citizens, need to tell the world that military cooperation and diplomatic and trade ties with Israel must stop immediately until they [Israel] respect international law," group spokeswoman Neta Golan told AA. Having grown up in Tel Aviv, she says she had been unaware of the Israeli occupation of Palestinian land until the first intifada broke out in 1987. "If you want to be a nation like others, then you must respect basic human rights, democracy and equality," said Golan, who now lives among Palestinians in the West Bank city of Ramallah.

"Israeli Jews will not accept equality unless the world says 'We will not accept this apartheid regime,' as they said to South Africa, and stops supporting Israel with arms deals, trade and diplomatic ties," she insisted. Activist and writer Miko Peled, author of "The General's Son: Journey of an Israeli in Palestine," recently joined the group. He, too, describes what Israelis are doing to Palestinians as "genocide." "I call on people of conscience ... around the world to support the Palestinian struggle and unite to call for an end to the apartheid regime in Palestine," he told AA. He accused world powers of complicity in Israel's "horrendous crimes" against Palestinians. "Israel is getting billions of dollars from America [and] it is doing business with the entre Western world, mostly in the defense industry," he said. "Western powers are supporting what Israel does ... We don't see sanctions or Israeli ambassadors being sent back to Tel Aviv, but quite the opposite," he added. Peled went on to urge the Israeli government to stop bombing Gaza, lift the siege on the embattled enclave and release all Palestinian prisoners before opening talks aimed at finding a viable solution to the perennial Israel-Palestine conflict. "These need to be done immediately, without conditions," Peled said.
RELATED TOPICS