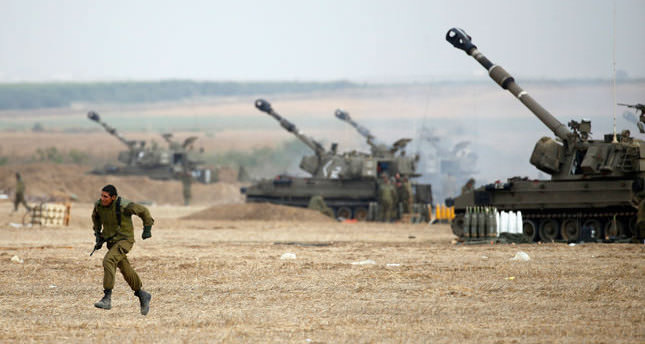 by Jul 20, 2014 12:00 am
The armed wing of the Palestinian Hamas group claimed on Sunday night that it had kidnapped an Israeli soldier, prompting celebrations in the streets of Gaza City.

"The Israeli soldier Shaul Aaron is in the hands of the Qassam Brigades," a spokesman using the nom-de-guerre Abu Obeida said in a televised address. A spokeswoman for the Israeli military said they were aware of the claim and were investigating.

AFP correspondents said there were celebrations in Gaza City, as well as in the streets of the West Bank cities of Ramallah and Hebron following the announcement from the Ezzedine al-Qassam Brigades, with Palestinians firing guns in the air and praising Hamas.

The Qassam Brigades said the soldier had been kidnapped 24 hours earlier during an ambush on Israeli forces in the Tuffah district on the eastern edges of Gaza City.

There has been heavy fighting on the eastern edges of Gaza, with Israel saying Sunday that 13 soldiers had been killed in violence overnight. Hamas spokesman Sami Abu Zuhri hailed the news in a statement.

"The announcement by the Qassam Brigades of the capture of a Zionist soldier is a great victory and revenge for the blood of the martyrs," he said. Hamas last kidnapped an Israeli soldier, Gilad Shalit, in 2006.

He was held until 2011, when he was freed in exchange for 1,027 Palestinian prisoners, some of whom have subsequently been rearrested by Israel.

The claim came on day 13 of the latest flare-up in violence between Israel and Hamas, which has seen the deaths of 438 Palestinians and 20 Israelis, 18 of them soldiers.

More than 60 Palestinians were killed in the Shejaiya district alone overnight and into Sunday morning in heavy Israeli tank fire. The current round of conflict began on July 8, with Israel announcing on July 17 that it would undertake ground operations in Gaza.