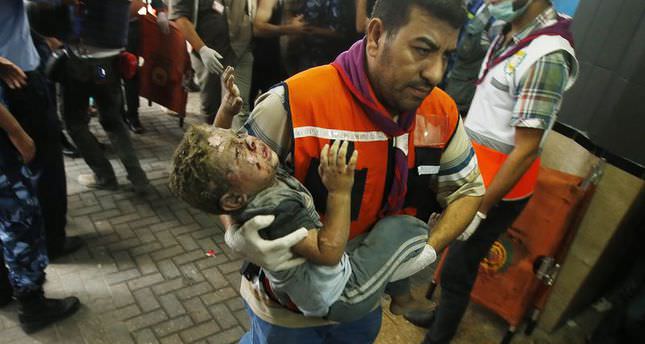 by AA Jul 20, 2014 12:00 am
The death toll from the Israeli shelling of Shujaya residential neighborhood in eastern Gaza City on Sunday rose to 60, Palestinian Health Ministry spokesman Ashraf al-Qodra said.

The ministry's medical crews managed to extract 50 bodies from under the rubble of the area's destroyed houses, including 17 children, 14 women and four elders, al-Qodra told a press conference.

At least 210 injured people are being treated from wounds they had sustained during the Israeli bombardment, he added.

The latest fatalities increase to 410 the number of Palestinians killed in Israeli attacks against the blockaded Gaza Strip since July 7, said al-Qodra.

Dozens of Israeli tanks and military vehicles forced their way into the eastern parts of Gaza City on Sunday amid heavy artillery fire, prompting thousands of Palestinians to flee their homes towards the center of the city.

Eyewitnesses told AA that Israeli troops had advanced into Zaitoun, Toffah and al-Shujaya presidential neighborhoods where they pounded several homes.

The incursion was coupled with heavy fighting between Israeli troops and Palestinian resistance fighters, the witnesses added.

Since July 7, Israel has been pounding the besieged Gaza Strip with devastating air and naval bombardment with the ostensible aim of halting rocket fire.
Last Update: Jul 21, 2014 11:11 am
RELATED TOPICS