1100 homes destroyed by Israel in Gaza since July 7 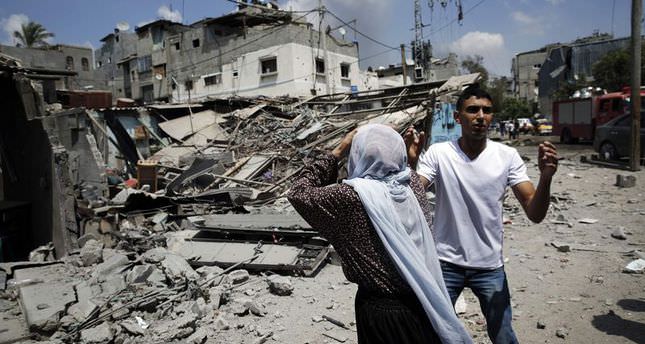 by AA Jul 21, 2014 12:00 am
Some 1100 Palestinian homes have been flattened by Israel's ongoing onslaught on the blockaded Gaza Strip that began July 7, according to Palestinian Minister of Housing and Public Works Mufeed al-Hassayna.

"The Israeli military operation has completely destroyed 1100 homes in the Gaza Strip and left 18,300 others partially damaged," al-Hassayna told Anadolu Agency on Monday.

At least 509 Palestinians, mostly civilians, have been killed-and more than 3150 injured, many seriously-in relentless Israeli attacks on the Gaza Strip that began two weeks ago.

On Thursday night, Israel expanded its offensive to include ground operations, sending thousands of troops into the densely-populated Palestinian territory.

Gaza-based resistance factions, meanwhile, have continued to fire rockets at Israel-some of which have reached Tel Aviv-in response to fierce bombardments, which continued on Monday, by the self-proclaimed Jewish state.

At least 18 Israeli soldiers have been killed since ground operations began Thursday night.