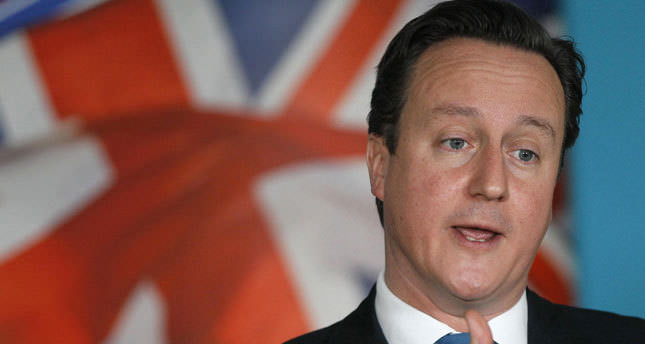 by Yusuf Selman İnanç Jul 21, 2014 12:00 am
U.K. Prime Minister David Cameron and German Chancellor Angela Merkel expressed their explicit support for Israel through claiming that Israel holds the right to defend itself against the "terrorists" referring to Hamas, and ignoring that Hamas took over power through elections. Similar to his counterparts, French President Francois Hollande expressed France's solidarity with Israel in the face of rocket attacks launched from Gaza.

Hollande also expressed his concern over the rising death toll and said that peace must be restored according to the cease-fire regulations signed in 2012. Yet, his concern did not prevent his country from banning the pro-Palestine anti-Israel protests. The U. N., designed to maintain peace across the world after World War II, also condemned rocket fire from Gaza but was also alarmed by Israel's heavy response. Yet, concern over the increasing death toll - with the majority being women and children - has not been voiced.

Some Western media outlets also strictly avoided giving priority to the death of civilians in Gaza and focused on the two Israeli soldiers who were killed on the weekend by Hamas. While stressing that Hamas constantly launches rocket attacks into Israeli lands, most of which are not officially recognized and not included in the 1967 borders, the media outlets preferred to mention the civilian deaths after Hamas' armed al-Qassam brigades' attacks.

Although European governments and some media outlets insisted on repeating that Israel has the right to self-defense and ignoring the horrifying situation for Gazans who have been trapped in that tiny land as Egypt and Israel have closed the exit gates, European people have shown their solidarity with Gazans as opposed to their governments through organizing demonstrations that huge crowds have attended.

In London, thousands of demonstrators marched from 10 Downing Street to the Israeli Embassy in Kensington chanting slogans against Israel. Trafalgar Square, Piccadilly Street and Hyde Park Corner were closed. A Londoner said it was one of the biggest demonstrations he had ever seen in London.

Whereas the protesters peacefully ended the demonstration in London, the French police fired tear gas at demonstrators as the president said the protests would be a risk to public order. As many as 6,000 protestors, mostly peaceful gathered in Barbes. The police blocked the march after 500 meters, which sparked anger among the protesters. After police intervention the protesters threw stones and accused President Hollande of cooperating with Israel during the strikes on Gaza.

From Jakarta, Indonesia; Chicago, U.S.; Johannesburg, South Africa to Cairo, Egypt, not only Muslims, but members of many other religious faiths condemned Israel and demanded their governments to take steps to stop Israel. Despite statements released by European leaders, the people have shown that their views toward Gaza and Israeli strikes are quite different.
Last Update: Jul 21, 2014 1:02 pm
RELATED TOPICS