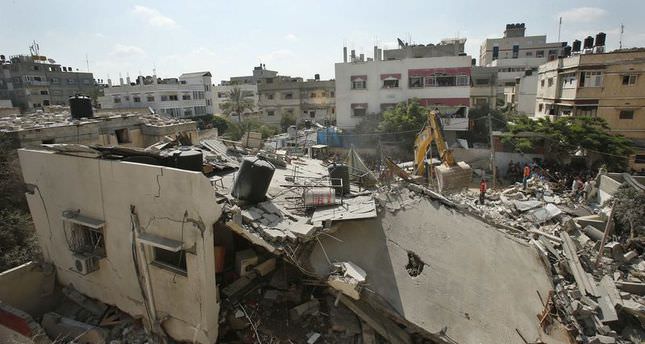 "Not all the victims' bodies could be extracted from the neighborhood as the Israeli army is still preventing paramedics from doing their work," Mohamed al-Attar, deputy director of Gaza's civil-defense authority, told Anadolu Agency.

"We managed to extract some of the bodies that had been strewn on the streets in Shujaya," al-Attar said. "But dozens, some of whom might still be alive, remain trapped under the rubble, and Israel is blocking our access to them."

He went on to say that Israeli forces had leveled some buildings in the neighborhood with their residents still inside them.

"Israel has continued to target emergency staff and equipment stationed outside Shujaya," he asserted.

Around 74 Palestinians were killed and more than 200 injured when Israel pounded Shujaya with artillery on Sunday following fierce ground battles between Palestinian resistance fighters and Israeli troops, which ultimately forced the latter to retreat.

The Israeli army confirmed later on Sunday that 13 of its troops had been killed in overnight clashes with Palestinian resistance fighters during ground operations in the Gaza Strip.

The Palestinian death toll from Israel's ongoing offensive against the Gaza Strip-now in its third week-has risen to 606, including 160 children and 77 women.

Israel's "Operation Protective Edge," the ostensible aim of which is to staunch rocket fire from Gaza, is the self-proclaimed Jewish state's third major offensive against the embattled coastal enclave-which is home to around 1.8 million Palestinians-in the last six years.