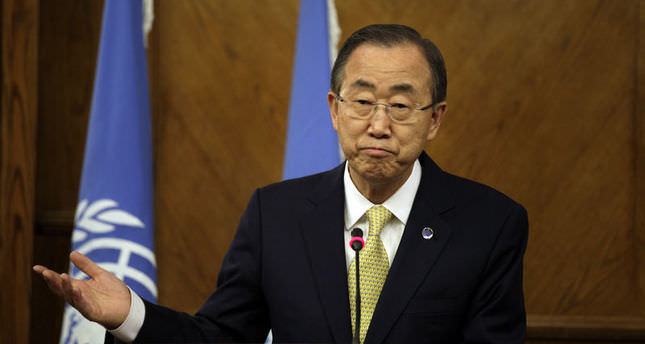 by Jul 24, 2014 12:00 am
U.N. Secretary-General Ban Ki-moon said on Thursday he was appalled by an attack on a United Nations-run school in the Gaza strip that killed civilians, including children, and U.N. staff.

"Circumstances are still unclear. I strongly condemn this act," Ban said in a statement. "Many have been killed – including women and children, as well as U.N. staff."

The Gaza health ministry said at least 15 people had been killed and some 200 wounded. Israel Radio, without citing a source, reported that most of those killed at the United Nations school were children.

"Throughout the day, our staff had been attempting to arrange a humanitarian pause in the hostilities so that civilians could be evacuated," said Ban.

More than 140,000 Palestinians have fled 17 days of fighting between Israel and Gaza militants, many of them seeking shelter in buildings run by the U.N. Refugee Works Agency (UNRWA). Israeli forces are trying to stop Hamas militants, which rules Gaza, and their allies from firing rockets into Israel.

Almost 750 people have been killed during the conflict in Gaza. Ban expressed condolences to the families of innocent civilians "killed as a result of the massive Israeli assault."

He once again "condemned Hamas rocket fire and called on Israel to exercise particular care to avoid any attack on United Nations premises where civilians have taken refuge."

Ban expressed alarm on Wednesday after rockets were found in a vacant U.N. school in Gaza for the second time in a week, warning in a statement that "those responsible are turning schools into potential military targets, and endangering the lives of innocent children."