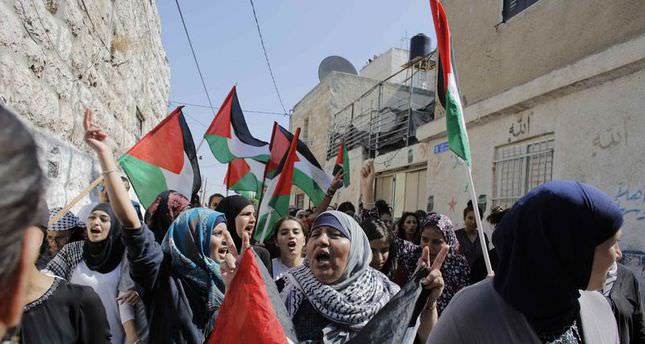 After thousands of Palestinians took to the streets in the West Bank and Jerusalem to protest the Israeli assault on Gaza, Hamas leaders called on all Palestinians to begin a third Intifada

Hamas leaders have called for a third Intifada after tens of thousands of Palestinian took to the streets to protest Israel's military campaign in the Gaza Strip, which has thus far resulted in the killing of 828 Palestinian civilians, including many children and women. Israeli radio reported early Friday morning that a Hamas' spokesman had said that the time was right for Palestinians to rise up against Israel's attacks on Gaza.

Meanwhile, in Jerusalem, thousands of Israeli security forces were deployed for possible Palestinian protests after Friday prayers at a key Muslim holy site, said a police spokeswoman, according to AFP.
While many Hamas leaders from Gaza or aboard have called for an Intifada, Hamas TV reportedly began to air Intifada songs on Friday as more Palestinians are expected to take the streets to join the riots. Violence flared up Thursday night, with many Palestinians marching from Ramallah to Jerusalem. In heavy clashes with Israeli police, two Palestinians were reportedly killed and more than 200 were injured north of Jerusalem. In addition, 40 Palestinians were reportedly arrested.

As the clashes in the Gaza Strip intensified, Israeli radio reported that Israel's security cabinet met on Friday to discuss a new cease-fire proposal for Gaza tabled by U.S. Secretary of State John Kerry. His proposal includes "a break in hostilities lasting seven days, during which Israeli forces could continue to destroy tunnels in Gaza used for attacks against Israel," according to the DPA news agency. Israeli military officials stated that 65,000 reserve forces were mobilized for ground operations in Gaza as 31 tunnels have been found so far but only around one-third of them have been destroyed.

U.N. chief Ban Ki-moon on Friday called for an immediate "humanitarian pause" to fighting in the Gaza Strip. Ban's made his remarks after several meetings with U.S. Secretary of State John Kerry and Egyptian officials, aimed at ending the ongoing conflict.
"On this, the last Friday of Ramadan, I call for an immediate, unconditional humanitarian pause in the fighting in Gaza and Israel. This pause would last through… [the] holiday period," Ban said in a statement released by his office. "We can build on this initiative by supporting international efforts to put in place the elements of a longer-term cease-fire plan," he added.

As Israel's Security Cabinet discussed the expansion of its military operation and considered the cease-fire proposal, intense fighting between Israeli ground troops and Hamas groups has incessantly continued on the ground. Israeli aircraft struck 30 houses in the Gaza Strip early Friday. According to the Israeli military, 45 sites in Gaza were hit, including a Hamas military command post.

Since July 8, Israeli warplanes have targeted the Gaza Strip in a military operation dubbed "Operation Protective Edge," which is Israel's third major offensive against the embattled Gaza Strip in the last six years. According to the latest reports, the Palestinian death toll from Israel's devastating military offensive has reached 828, mostly civilians. More than 5,000 Palestinians have been injured according to Palestinian officials. Tension first escalated between the Israeli military and Palestinian group Hamas over the discovery of three Israeli teenagers' bodies in the southern West Bank and the subsequent murder of a Palestinian teenager by three suspected Jewish settlers.