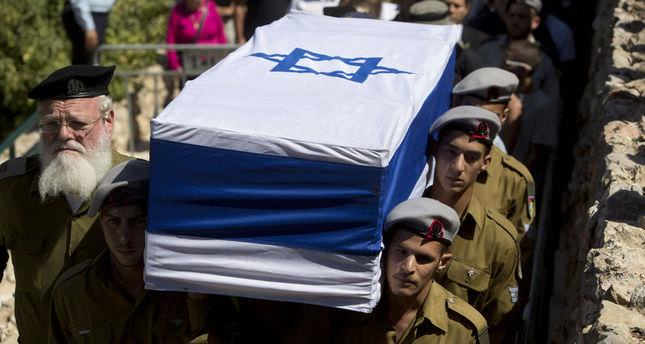 by AA Jul 28, 2014 12:00 am
GAZA CITY— The Ezzeddin al-Qassam Brigades, the military arm of the Palestinian resistance movement Hamas, on Monday said that it had killed ten Israeli troops in eastern Gaza.

"Our mujahedeen had carried out a heroic operation behind the lines of the enemy eastern Gaza City," the brigades said in a statement.

"We confirm the killing of ten troops and the safe return of all our mujahedeen," it added.

He did not, however, outline the results of the infiltration or whether the operation had caused casualties among Israeli troops.

Qassam Brigades had earlier announced that it fired 25 rockets at Israeli sites and troop concentrations in eastern Gaza.

At least ten Palestinian children were killed and 45 others injured on Monday by Israeli shelling of the western Gaza City Al-Shati Camp, a Palestinian Health Ministry official said.

The official, who asked not to be named, added that the bodies of at least ten children arrived at Al-Shefaa Hospital, having been killed by an Israeli strike on a camp public park.

He added that 45 injured victims had also arrived at the hospital, describing the conditions of some of the victims as "serious".

Israel launched a series of aerial strikes on different parts of the Gaza Strip on Monday, the first day in the Islamic minor feast.

The United Nations had proposed a new 24-hour ceasefire that starts at 2:00pm on Monday, but Israel had rejected it.

Hamas had earlier said that Israel refuses to any kind of calm during the Islamic feast.

At least 1045 Palestinians have been killed and more than 6235 others injured in relentless Israeli attacks on Gaza since July 7, according to the Palestinian Health Ministry.