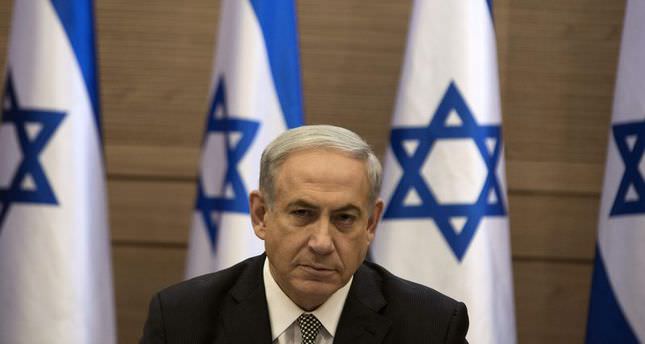 by AA Jul 28, 2014 12:00 am
JERUSALEM—Israel's leaders on Monday threatened the Gaza-based Palestinian resistance movement Hamas that their country would wage an extended battle against it.
In a joint televised address, Israel's Prime Minister Benjamin Netanyahu, Defense Minister Moshe Ya'alon and army Chief of General Staff Benny Gantz said they are ready for a long war against Hamas.
Netanyahu said Israel has to be ready for a long war until the objectives of the current operation against Gaza are achieved.
Ya'alon said he would order the Israeli army to widen the scope of its operations against Hamas in the days to come.
He said the Israeli army would work to prevent Hamas from arming in the future.
Gantz, for his part, said the Israeli army would hit harder at Hamas and also destroy the tunnels of the Gaza Strip.
Since July 7, Israel has pounded the Gaza Strip with fierce aerial bombardments with the ostensible aim of halting rocket fire from the strip, leaving at least 1055 people dead and more than 6235 injured.
Gaza-based resistance factions, meanwhile, have continued to fire rocket at Israeli cities in response to relentless Israeli bombardments.
According to official Israeli figures, 40 Israeli soldiers and seven civilians have been killed since the hostilities began.
Israel's military operation, dubbed operation "Protective Edge," is the self-proclaimed Jewish state's third major offensive against the densely-populate Gaza Strip – which is home to some 1.8 million Palestinians – within the last six years.
In 2008/9, over 1500 Palestinians were killed in Israel's three-week-long operation "Cast Lead."
Last Update: Jul 28, 2014 10:08 pm
RELATED TOPICS