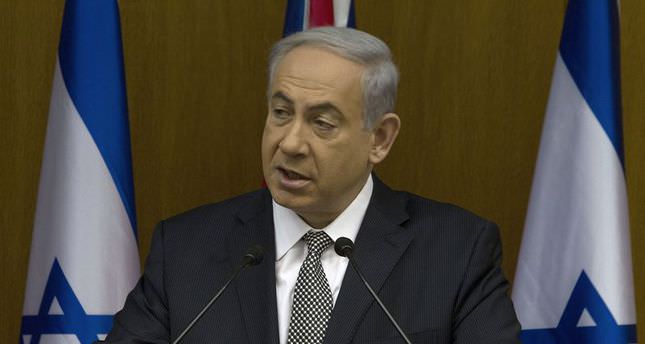 by AA Jul 28, 2014 12:00 am
JERUSALEM —Israeli Prime Minister Benjamin Netanyahu said on Monday that an earlier call by the United Nations Security Council for a ceasefire in Gaza does not meet his country's security needs.
Netanyahu said in a statement that he delivered a message to this effect to United Nations Secretary-General Ban Ki-moon during a phone conversation on Monday.
He said he notified the U.N. chief that the international community must seek the demilitarization of the Gaza Strip and its resistance movements.
Netanyahu said Israel had accepted three ceasefire proposals thus far, but these ceasefires were all breached by the Gaza-based Palestinian resistance movement Hamas.
He added that a Sunday statement by the Security Council on the need for bringing about an immediate ceasefire in Gaza relates more to the needs of Hamas, not to those of Israel.
The Israeli Prime Minister accused Hamas of using civilians as human shields.
On Sunday, the United Nations Security Council called for an "immediate" and "unconditional" humanitarian ceasefire in Gaza during the three days of the Muslim minor feast and beyond it.
Ten children were killed on Monday by an Israeli strike on a western Gaza City park, which raises Gaza's total death toll from Israel's ongoing war on the strip to 1055 since July 7.
The self-proclaimed Jewish state has started its offensive – codenamed "Protective Edge" with the stated aim of undermining the ability of Gaza-based resistance movements to launch rocket attacks against it.