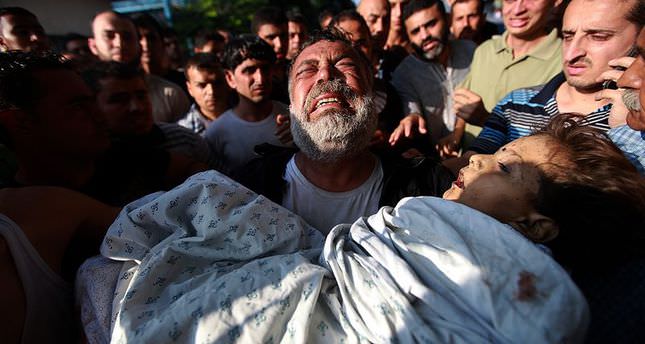 by AA Jul 29, 2014 12:00 am
More than 100 Palestinians were killed in Israeli attacks across the Gaza Strip on Tuesday, taking the death toll from a devastating Israeli onslaught to 1283 since July 7, a Health Ministry spokesman said.

Six people were also killed and scores injured in Israeli shelling of the southern Rafah city, he said.

On Wednesday at least 20 people were killed and more than 50 injured when Israeli tanks shell a school used as an emergency shelter by refugees in Gaza, the Health Ministry said.

The latest fatalities brought to 1283 the number of Palestinians killed in relentless Israeli attacks on the Gaza Strip since July 7. At least 6700 people have also been injured.

Israel claims that the offensive, now in its fourth week, aims at halting rocket fire from the blockaded Palestinian territory.