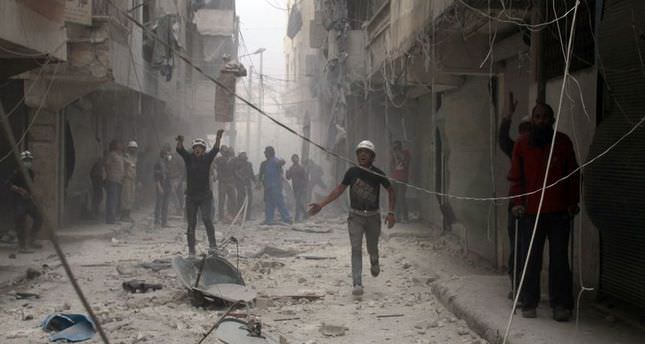 by Jul 30, 2014 12:00 am
Human Rights Watch sharply criticised the Syrian air force on Wednesday for intensifying strikes on Aleppo, despite a UN Security Council resolution ordering all sides in the conflict to stop indiscriminate attacks.

The New York-based rights group also rapped the Security Council for inaction over the violence in Syria in a statement issued ahead of a meeting of the UN body.

The resolution banned the indiscriminate use of barrel bombs -- widely used by Syrian government forces on rebel-held towns and cities -- and all other weapons in populated areas.

"Month after month, the Security Council has sat idly by as the government defied its demands with new barrel bomb attacks on Syrian civilians," HRW's Sarah Leah Whitson said.

The group also urged two key backers of President Bashar al-Assad, Russia and China, to allow the Security Council to implement the resolution.

HRW said it has documented "over 650 major new damage sites consistent with barrel bomb impacts" in opposition-held areas of Aleppo city since the resolution was passed.

"Witness statements, satellite imagery analysis, and video and photographic evidence obtained by Human Rights Watch indicate that government forces have maintained and even increased their bombardment rate of Aleppo," the group said.

HRW described barrel bombs as "cheaply made, locally produced, and typically constructed from large oil drums, gas cylinders, and water tanks, filled with high explosives and scrap metal to enhance fragmentation, and then dropped from helicopters."

According to the Syrian Observatory for Human Rights, hundreds of civilians, including children, have been killed in a major aerial offensive launched by government forces on Aleppo in December.

"The deliberate targeting of civilians is a war crime, and if carried out in a widespread or systematic way as part of a policy of the government or an organised group, can amount to crimes against humanity," said HRW.

The group criticised rebel forces for carrying out "indiscriminate attacks as well, including car bombings and mortar attacks in pro-government areas".

The war in Syria has killed more than 170,000 people, and forced nearly half the population to flee.