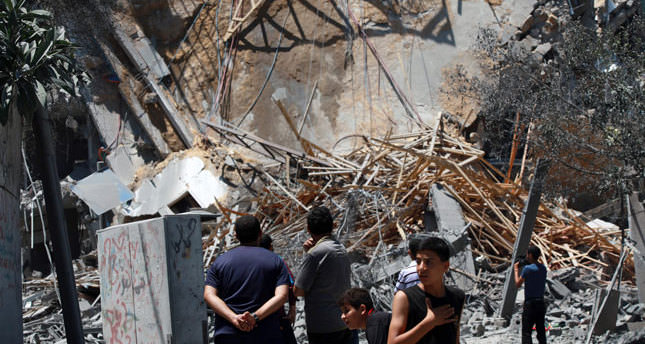 by AA Jul 31, 2014 12:00 am
An ongoing Israeli onslaught against the Gaza Strip has completely destroyed 5238 homes in the embattled coastal enclave, a Palestinian cabinet minister said Thursday.

"Some 5238 housing units have been destroyed and nearly 30050 others partially damaged by Israel's military operation in Gaza," Minister of Public Works and Housing Mufeed al-Hassayna told Anadolu Agency.

The tally is preliminary as some of the enclave's areas are still inaccessible for the ministry's teams due to the intensity of the Israeli shelling, he added.

Israel has been pounding the Gaza Strip-home to 1.8 million people-for the almost past four weeks with the stated aim of halting rocket fire.

As many as 1422 Palestinians-mostly civilians-have been killed and around 8000 injured in unrelenting Israeli attacks since July 7, according to Palestinian health officials.

Israel, for its part, has confirmed the killing of 56 troops in battles with Palestinian fighters and three civilians in rocket attacks.

The Israeli offensive-codenamed "Protective Edge," is the self-proclaimed Jewish state's third major offensive against the densely-populate Gaza Strip-which is home to some 1.8 million Palestinians-within the last six years.