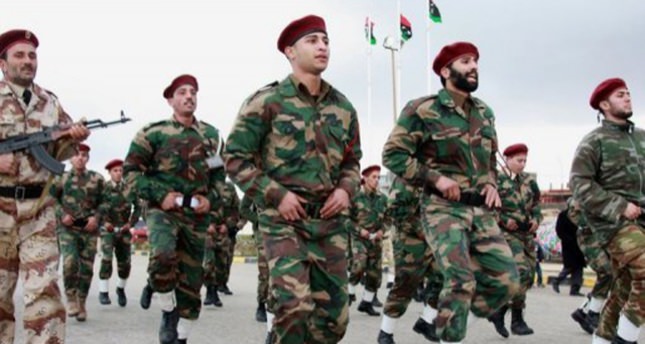 by Daily Sabah Jul 31, 2014 12:00 am
After days of fighting, the Libyan army has lost control over the main military base of the Special Forces in the eastern city of Benghazi. "Special Forces under the command of (Colonel) Wanis Abu Khamada withdrew after several attacks," the army official said. It is also stated that the militia's seizure of the military headquarters is seen as "the biggest loss yet for the armed forces in its fight against the country's powerful militias."
During the heavy fighting, at least 30 people were reportedly killed.

The violence in Libya has risen significantly amid a wave of kidnappings and assassinations, as Libyan government forces continue to battle with unruly rebel militias in two main cities, Benghazi and Tripoli. Libyan government forces have struggled with the chaos to provide stability against brigades of former rebels and militias that have refused to disarm since Muammar Gaddafi's one-man rule was removed from power in 2011.

Ali Zeidan, the former Libyan prime minister ousted by the parliament had also been kidnapped last year from a Tripoli hotel. This series of kidnappings highlight "the failure of [government] authorities" in imposing law and order against the rebel militias who have been threatening the unity of the country.

After two weeks of fighting around Tripoli airport, which has left around 100 people dead and 400 wounded, a rocket hit the Tripoli fuel depot near the international airport on Sunday, causing growing security concerns, as the burning oil could reach a natural gas reservoir.

Suffering severe fuel and power shortages, Italy and ENI, an Italian multinational oil and gas company headquartered in Rome, agreed to help.
As the tension escalates, many foreign missions, including the U.N., France, Portugal, the Netherlands, Canada and Bulgaria, have announced the closure of their embassies and urged their citizens to leave Libya. World leaders urged an immediate cease-fire, while calling on the United Nations "to play an essential role in facilitating the political process" in order to bring an end to the political chaos in Libya.

Since the toppling of Gaddafi's 42-year rule, Libya has been suffering from a chronic absence of security and order with numerous attacks, kidnappings and crimes. The central government does not have enough power to spare the country from long-lasting political instability and violence due to the absence of an effective army. After Libyan Special Forces and regular air force units announced their support for a renegade army general, Khalifa Belqasim Haftar, the crisis escalated, leaving the country vulnerable against rebel attacks.

Considering the turbulent political situation in Libya, it is strongly believed that as long as the incumbent government lacks powerful political authority, existing rebel militia groups would carry out their task of controlling government branches and maintaining violent attacks.
Last Update: Jul 31, 2014 1:30 am
RELATED TOPICS