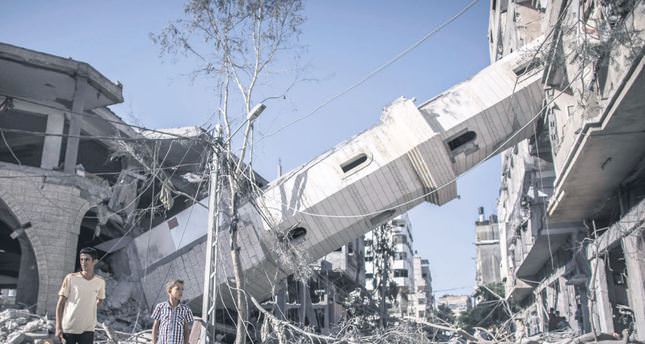 WIth the death toll now above 1,300, Israel's three weeks of targeted attacks have destroyed schools, mosques, playgrounds, hospitals, power plants and other key infrastructure and is rapidly making the Gaza Strip uninhabitable.

On the 23rd day of the Israeli strikes on Gaza, the death toll reached 1,300, while the number of wounded increased to 7,200. Despite efforts by the U.S., Egypt, Turkey and Qatar, Israel has been killing civilians. Late Tuesday, a U.N. school was targeted by Israeli warplanes, leaving 19 dead and 90 injured, although U.N. buildings, which are designated as shelters for civilians, cannot be attacked according to international agreements. Yet, the Israeli army has been violating international agreements and is accused of committing war crimes by Gaza officials. An Israeli official said Israel will launch an investigation into the bombardment of the U.N. school.

Last week, Israel also attacked a playground while children were in the area and killed 15 people - most of whom were children. It was also reported that Israel consciously targets mosques, homes, hospitals, power plants and shelters, claiming that Hamas and its military wing, al-Qassam Brigades, conceal weapons in these locations.

While Hamas denies these claims, activists from the region report that Israeli strikes kill only civilians and aims to make Gaza uninhabitable. The activists say that Israel wants Gazans to leave the area and wants to make it a part of Israeli land and that the attacks are an act of ethnic cleansing, as the exit gates are strictly closed and there is no place for Gazans to go.

As a response to Israeli attacks, al-Qassam Brigades continue firing rockets on Israeli lands and land occupied by illegal settlers. Besides the rocket attacks, the Israeli army has lost more than 50 soldiers during the ground invasion. Although the Israeli Defense Force refutes the claims, al-Qassam officials said they have killed as many as 113 Israeli soldiers. In a video released by the brigades on YouTube, it was shown that the militants infiltrated a building held by the Israeli army and killed soldiers.

Israeli officials remained silent after the video was aired. In an interview with Khaled Meshaal, the political leader of Hamas, he said: "We are ready to live with Christians and Jews but not with the occupiers. We will accept a cease-fire proposal that stipulates Israel lifts the siege on Gaza." Touching on rocket fire, which was criticized by many Western countries including the U.S., he said, "What would [U.S. President] Mr. Barack Obama do, if someone was striking his country's lands? We are firing the rockets to defend ourselves. We have not launched the war but [Israeli Prime Minister Benjamin] Netanyahu and Israel did."

The kidnapping and killing of three Israeli teenagers that triggered Israeli aggression and was attributed to Hamas, was not made by Hamas according to Israeli police. Yet, Israel has not stopped the attacks. As a response to the killing of the three Israeli teenagers, a Palestinian teenager was set on fire while alive, and his cousin was severely beaten by Israeli police while under arrest. So far, cease-fire talks have not reached a conclusion.
Last Update: Jul 31, 2014 1:28 am
RELATED TOPICS