We have no knowledge about captured soldier: Qassam 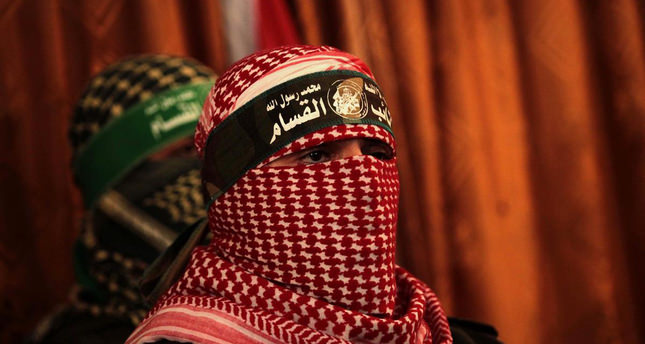 by French Press Agency - AFP
Aug 02, 2014 12:00 am
The Ezzeddin al-Qassam Brigades, the armed wing of Palestinian resistance faction Hamas, said early on Saturday that it has no knowledge about the kidnapped Israeli soldier, his whereabouts, or even the way he was captured.

Qassam said in a statement that the Israeli army had used the hype about the humanitarian ceasefire, which collapsed in Gaza soon after it started at 8:00am (0500 GMT) on Friday, in order to advance its troops 2 kilometers into eastern the southern Gaza Strip City of Rafah.

The brigades added that one of its units in the area had confronted the Israeli troops and clashed with them one hour before the ceasefire started.

"Israel's warplanes, however, launched strikes against Gaza civilians after 10:00am in a flagrant violation of the ceasefire under the pretext that they are searching for the captured soldier," the brigades said.

It added that it lost contact with the unit that clashed with Israeli troops eastern Rafah, noting that the members of the unit might have been killed along with the Israeli soldier, presuming that the soldier was kidnapped by the unit earlier.

Qassam said it told the ceasefire mediators that it had accepted the calm in the areas that were subject to Israeli shelling and strikes.

It added, however, that it cannot abide by the ceasefire while Israeli troops keep advancing into the Gaza Strip. It said these advancing troops would eventually clash with its units deployed across Gaza.

A 72-hour humanitarian truce that started at 8:00am (0500 GMT) on Friday collapsed a short time later when Israel resumed its strikes against Rafah city.

Israel said it did not abide by the ceasefire after one of its army units was attacked in the southern part of Gaza, accusing Hamas of violating the ceasefire.

The truce was mediated by United Nations Secretary-General Ban Ki-moon and United States Secretary of States John Kerry. Israel and the Palestinians should have sent negotiators to discuss a durable ceasefire in the Egyptian capital Cairo.

Israel's attacks were, however, considered by the Palestinian resistance movement Hamas as an attempt by Israel to mislead the world and justify its killing of Palestinian civilians.