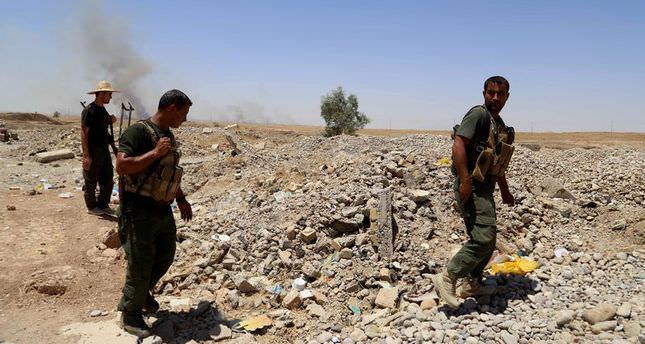 by AA
Aug 03, 2014 12:00 am
IDLIB, Syria—The Syrian military has dropped devastating barrel bombs on the opposition-controlled areas of Idlib, killing 23 people and injuring dozens of others, activists said.

The casualties from the attack on Jabal al-Akrad, Jisr al-Shughur and Najia districts of Idlib included women and children, the Syrian Revolution General Commission said in a statement Saturday.

The injured were immediately taken to nearby field hospitals and rescue personnel tried to retrieve the dead and injured from under the rubble of the destroyed homes, the statement said.

Meanwhile, Syrian opposition forces seized greater part of a military academy situated in Aleppo after launching an attack with Grad missiles, according to a spokesman for the Free Syrian Army-linked Mujahideen Brigade.

Spokesman Ahmad Hassan told Anadolu Agency on Saturday that, with the help of other armed opponent groups in Syria, the Brigade took control of a great part of the academy located in Dahiyet al-Assad neighborhood of Aleppo.

"The joint purpose of the armed opposition forces is to seize control of the western part of Aleppo, which is currently under Assad regime's control," said Hassan, adding that the opposition fighters inflicted considerable damage to the academy building with missiles.

Hassan also said fierce clashes were continuing between forces loyal to President Bashar Assad and opposition forces in Aleppo. He did not give any information about the casualties from both sides.

"The regime forces are holding air strikes in the region as they are afraid of launching ground operations," said Bostani.

The country has been gripped by almost constant fighting since the Assad regime launched a violent crackdown in response to anti-government protests in March 2011, triggering a conflict which has spiraled into a civil war.

The UN has stopped updating its death toll for the country because an official count had become too difficult to verify. At least 100,000 deaths were recorded in the last official count in July 2013.
Last Update: Aug 03, 2014 9:29 am