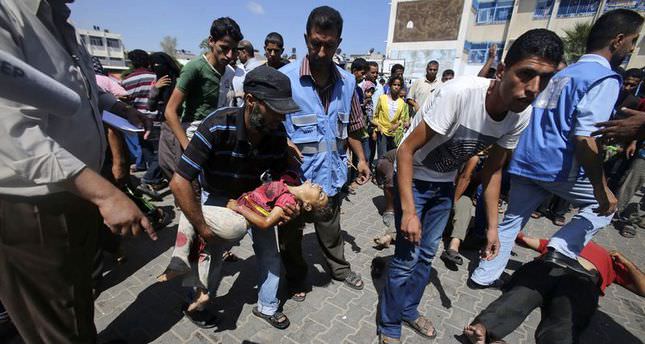 Israel continues its attacks on Gaza, and the death toll increases while many of the murdered Gazans are children and mostly unarmed civilians. The Israeli aggression continues sparking huge anger throughout the world

Israel continued bombing Gaza over the weekend, violating the three-day-long cease-fire by claiming that an Israeli soldier was abducted by Hamas or its armed wing, al-Qassam Brigades – despite the groups' statements saying that they were not involved in the abduction. The Israeli Defense Forces (IDF) released a statement on the missing soldier, stating he was found dead, but did not clarify whether he was killed by Hamas or al-Qassam. In response to Israeli aggression, Hamas fired rockets to Israeli lands – most of which were intercepted by the Iron Dome missile defense system.

Despite the U.N.'s warnings and condemnations on hitting a school belonging to the U.N. designated to house internally displaced Gazans, Israel hit another U.N. school early Sunday, leaving more than 10 dead. Yet, the U.S. and EU countries have been accusing Hamas for violating the cease-fire.

The Israeli attacks on civilians have been echoing in the world strongly, and from Washington, D.C. to Jakarta, regardless of their religion, people have been organizing demonstrations against Israel. Also, there were many significant social media campaigns condemning the Israeli mass killing of Palestinians. The latest campaign on Gaza is addressed to Israeli youth with the hashtag #LetterToIsraeliPeer becoming one of the trending topics worldwide only a few hours after it launched on social media. The letter was launched by the Islamic Conference Youth Forum for Dialogue and Cooperation (ICYF-DC) with the aim of raising voices over "the mass killings of civilians of Gaza by the [Israeli] government." "Address your consciousness. Don't allow murder of children to be committed in your name," the letter said while calling on Israeli young people to raise their awareness on the Israeli government's commitment to war crimes and possible crimes against humanity. Israeli youth is also called for a "protest [against the] killing of [Palestinian] children and women, slaughter of worshipper[s] during prayers and fast[ing] breaks, [and] destruction of sanctuaries like hospitals and mosques."