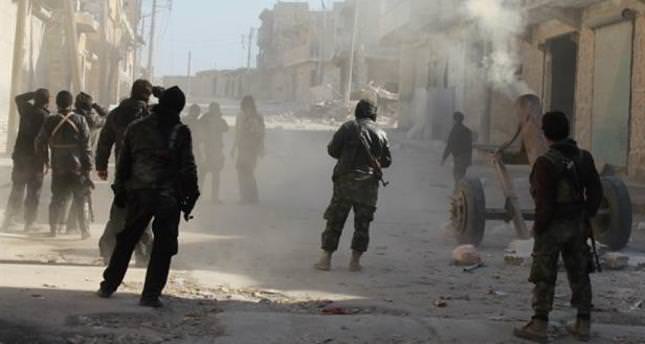 by Associated Press Aug 03, 2014 12:00 am
Syrian rebels who crossed into Lebanon and raided a border town have killed eight Lebanese soldiers, the military said Sunday, as clashes there continued overnight in the most serious spillover yet in the tiny country from its neighbor's civil war.

The fighting took place in Arsal, some 90 kilometers (55 miles) from the capital, Beirut, where local television footage showed wailing ambulances racing into town and soldiers standing guard just outside its limits.

Lebanese military forces sealed off the area, preventing reporters from approaching the town.

The fighting began Saturday, hours after the army said troops detained Syrian citizen Imad Ahmad Jomaa, who identified himself as a member of Syria's al-Qaida-linked Nusra Front. The National News Agency said Jomaa was detained as he was being brought to a hospital in Lebanon after being wounded while fighting Syrian troops.

The Nusra Front is one of the most powerful groups fighting to overthrow the rule of Syrian President Bashar Assad. It has a strong presence in northern and central Syria, as well around its eastern border with Lebanon.

Lebanon's Sunni community, including in Arsal, broadly support the Sunni rebels fighting against Assad. Shiites, like those belonging to Lebanon's Hezbollah militant group, typically back Assad.

Tens of thousands of Syrian refugees live in and around Arsal. Rebel fighters sometimes use the town as a base.

Jomaa was wounded as an ambush took place that killed dozens of opposition fighters, activists said. The Britain-based Syrian Observatory for Human Rights said Syrian troops and members of Lebanon's Hezbollah group ambushed the rebels in the Qalamoun region that borders Arsal, killing at least 50 of them.

It said seven Syrian troops and fighters of the Lebanese Shiite group Hezbollah were killed in the fighting.

The Syrian uprising began as peaceful protests against Assad in March 2011, but escalated into an insurgency when pro-government forces violently cracked down on dissent. Over 170,000 people, mostly combatants, have been killed in Syria in more than three years of fighting, activists say.