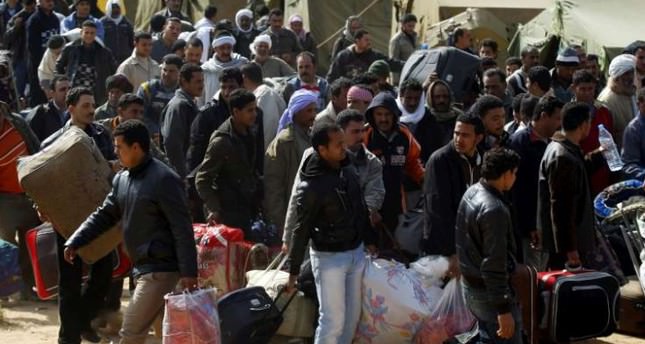 by Daily Sabah Aug 04, 2014 12:00 am
The Libyan capital Tripoli has suffered from escalating violence for the last two weeks due to increasing heavy clashes between rogue brigades for control of the international airport, which has led to an all-out battle for control of the entire capital. During the heavy clashes between rival militants, 22 people were reportedly killed on Saturday alone, according to a statement released early Sunday by Libya's interim government. The last two weeks of fighting has also endangered thousands of civilian lives, causing displacement of many families.

As the world suffers from a neverending series of conflicts, in Syria, Iraq and Ukraine, the recent chaos in Libya will no doubt lead to another major problem in North Africa as many families seek refuge in neighboring countries like Tunisia and Egypt.

After thousands of Libyans and foreigners who fled the violence streamed into neighboring Tunisia, the country closed its main border crossing, the Ras Ajdir crossing, with Libya on Friday, barring thousands of people from entering, the official Tunisian news agency TAP announced. According to Associated Press (AP) reports, no one managed to make it to the other side and security forces physically blocked access by placing vehicles on the border crossing.

As many Egyptians tried to break through the passage late Friday, a protest on the Tunisian-Libyan border erupted after Tunisian security officials rejected their entry due to visa requirements. The police responded by shooting into the air and firing tear gas. Tensions have been high on the border after two Egyptians were killed on Thursday when Libyan guards opened fire. As the country has been dragging into political chaos, many Western countries' foreign missions announced the closure of their embassies and urged their citizens to immediately leave Libya. BBC stated that a Royal Navy survey ship is on its way to evacuate Britons from Libya amid the worsening violence in the country.

Egyptian President Abdel-Fattah el-Sissi urged the international community to "begin working on a global anti-terrorism strategy in the region" in order to provide stability and security in Libya during a joint press conference held in Cairo on Saturday with Italian Prime Minister Matteo Renzi.
Both leaders also called on the U.N. to send a special envoy to Libya. "There should be a serious approach to meet the reality of events on the ground in Libya," el-Sissi said.

Amid the escalating violence, Libya's newly elected parliament held an emergency meeting on Saturday where 152 lawmakers gathered in Tobrouk, a city in eastern Libya near the Egyptian border, according to the official Facebook page of Libya's House of Representatives, AP news agency reported. However, the official opening was postponed until more lawmakers are able to arrive. Libyans went to the polls to elect a new 200-seat Council of Deputies on June 25; however, the final results of the elections to the House of Representatives have not yet been announced.

The violence in Tripoli erupted with the absence of political authority and security in early June between the two main armed militias, Zintanis and Misratans, who have been fighting to seize control of key installations, especially the international airport.

The airport, which has been controlled by Zintani brigades, is of crucial importance because it enables militia groups to easily access the center of Tripoli, which means greater control over the capital city. Apart from the battle over the airport, heavy clashes turned the eastern city of Benghazi into a battlefield between army units loyal to renegade army general Khalifa Haftar and the Ansar Al-Sharia militia who are fighting to gain complete control over the territory.
Last Update: Aug 04, 2014 1:32 am
RELATED TOPICS