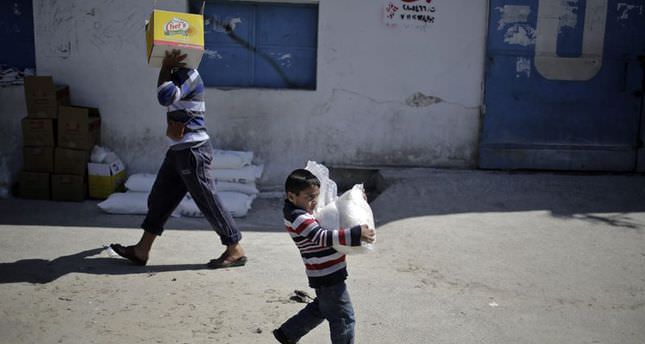 by AA Aug 06, 2014 12:00 am
Italy has sent 350,000 euros worth of tents, blankets, emergency power generators, drinking water converters and healthcare kits to war-ravaged Gaza Strip. Italy's Deputy Foreign Minister Lapo Pistelli accompanied a plane carrying the aid for Gaza on Tuesday and handed them over to the United Nations Relief and Works Agency (UNRWA) in Jerusalem.

"We all know the humanitarian situation is very hard in Gaza," Pistelli said in a press conference at UNRWA's office in Jerusalem.

He added that Italy will be among the other donors for Gaza and this is just a part of wider emergency aid plan.

"As we await the conditions for a permanent ceasefire," Pistelli said, "Italy is making its solidarity tangible with the Palestinian people, who are paying the highest price for the hostilities."


Some 30 trucks loaded with humanitarian aid on Tuesday evening left Jerusalem to enter Gaza through the Kerem Shalom (Karam Abu Salem in Arabic) crossing. Qatar, the United Arab Emirates and ordinary Palestinians from Jerusalem and the West Bank also contributed to the aid convoy.


UNRWA Commissioner General Pierre Krahenbuhl, on his part, said the aid is a message of solidarity for Gaza people.

"We expect many people from Gaza not to have a home to return," he said. "We don't see the Palestinian causalities and suffering as statistics," he added.

Since 2006, Israel has imposed a crippling siege on the Gaza Strip, home to 1.8 million Palestinians, when Hamas was voted to power.

Last month, Israel launched a deadly military offensive on the blockaded enclave, killing at least 1867 Palestinians – mostly civilians – and injured more than 9450 others.

Israel claims that the offensive was meant to undermine the ability of Palestinian factions to fire rockets at Israeli cities.

The Israeli army has confirmed the killing of 64 troops and the injury of 651 others in Gaza combat operations, while three civilians were killed in rocket attacks on Israeli cities.

Israel and Palestinian factions have endorsed an Egyptian proposal for a three-day ceasefire in the Gaza Strip starting Tuesday.

Israel has since completely withdrawn its forces from the besieged Palestinian territory.