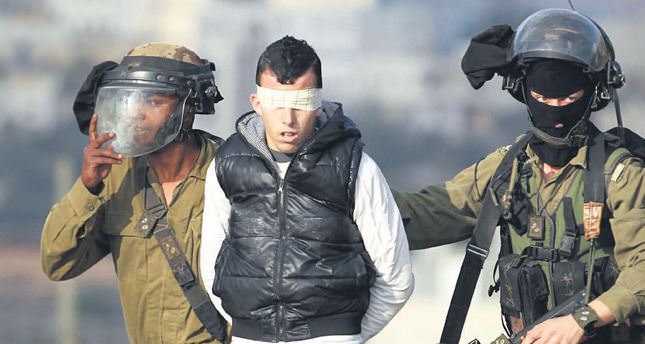 A report released by Euro-Mid Observer of Human Rights shows the punishments, illegal detentions, and violations of international agreements against Palestinian children by Israeli forces

One of the main questions, asked is: "Why don't Palestinians with Israeli passports living either in internationally recognized Israeli land or in occupied lands like Jerusalem under Israeli rule speak up with a stronger and unified voice against Israeli aggression on Gaza." It is a fact that the Palestinian population has been widely dispersed after decades-long efforts to stop Israeli expansion and find a way to survive in their homeland.

For instance, the supporters of Fatah, which was derived from the Palestinian Liberation Organization (PLO) and comes from a secular/leftist background, and the supporters of Islamist fractions including Hamas, do not agree on the way to fight against Israel. None of them are unified on ideological issues and the role of religion in society. Another important reason for the division within society is the effect of tribes who fight each other due to power struggles. For instance, Qawasmeh clan members had violated the cease-fire signed between Israel and all of the Palestinian factions to end the second intifada. They organized a bomb attack on a passenger bus on Aug. 19, 2003 killing nearly 23 Israeli citizens, which resulted in breaking the cease-fire. Following the bus attack, Israeli aggression toward Hamas increased, although Hamas said they were not involved in the attack, just as they did after the recent abduction and killing of three yeshiva students on June 12. Yet, Israel believed what it viewed as true and killed the famous leader Sheikh Ahmad Yassin in an airstrike, which was a big loss for Hamas.

In spite of the divisions, differences and power struggles, there is another fact on the ground, which is that the Israeli government, besides the apartheidresembling treatment on the street, imposes strict security rules on Palestinians through filming them during peaceful protests, forcing them to wait for hours at check-points just to reach their homes and treat almost every Palestinian as a potential terrorist. Israel never avoids razing a Palestinian's house in case of a security issue. And there is no legal authority to which Palestinians can apply.

One of Israel's illegal activities reveals the reason why many Palestinians remain silent against the occupation and oppression - the detention of children. A Geneva-based non-governmental and non-profit human rights organization, Euro-Mid Observer for Human Rights, which works on Palestine, Syria, Jordan, Egypt, Bahrain, the United Arab Emirates, Iraq, Saudi Arabia, Libya, Lebanon and Tunisia issued a report last month that reveals the Israeli forces' detention of children.

According to the report, Israel detained 2,500 children between January 2010 and June 2014 - 400 of the children were between the ages of 12 and 15. The report says the detention of children violates Article 37(b) of the Convention on the Right of the Child (UNCRC), which was ratified by Israel in 1991. The UNCRC, which was proposed by the U.N., differentiates the detention of a child from an adult and narrows the legal boundaries for detaining a child: "No child shall be deprived of his or her liberty unlawfully or arbitrarily. The arrest, detention or imprisonment of a child shall be in conformity with the law and shall be used only as a measure of last resort and for the shortest appropriate period of time." The report says that mostly, families are not informed of detentions and 75 percent of the ill treatments of children during and after detention meet the international criteria for torture. The report says more than half of the detentions were made at night, between 2 am and 5 am by surrounding the children's homes with tanks and other military vehicles - even blowing open the front door and entering inside with masks on without giving any warning.

Although the International Covenant on Civil and Political Rights states the condition that all people must be informed of the reasons for their arrest at the moment they are detained. The authors of the report spoke with a few Palestinian children who were previously detained and spoke on the condition of anonymity due to the sensitivity of the issue. It is not uncommon for Israeli forces to blindfold and chain children detainees' hands and feet. One of the previously detained Palestinian children, 14 year-old Rasheed, said that while going to a market to buy necessities for his home: "A group of Israeli soldiers detained and violently beat me and took me to a police station where I was interrogated." Although he was previously accused of throwing stones at Israeli forces, Rasheed denied the claims.

After staying under detention for two months he was released but kept under house confinement for six weeks. About a month later he was detained again when Israeli forces raided and ransacked his home. When his parents asked the reason for the detention, the only answer was "security reasons."

Another incident in the report happened to a 17-year-old Palestinian, Mohammad Farid Subih from Ras al-Ain in Nablus. Israeli forces detained him in Jan. 2014. A large number of Israeli army soldiers burst through their door, checked Mohammad's ID, chained his hands, blindfolded him and took him away without giving any information to his mother. "We were unaware of the reason of his detention and we knew absolutely nothing about him for eight days," his mother said.

Although article 37(b) of the UNCRC states that children have a right to legal representation and the support of their parents during interrogation, but the statements of the previously detained Palestinian children reveal that Israel does not abide by the article. The detainment period is 10 days on average but may last as long as 30. It is reported that the detained children are confined to a small room without a table, chair or windows. In the report the U.N. Special Rapporteur Richard Falk was quoted as saying, "Solitary confinement is a gross violation of the international norms of human rights. Such treatment is severe and inhumane, and it may affect children's mental and physical health."

According to witnesses it is common to see physical and psychological torture and deliberate acts of humiliation during interrogations. The report says that three of every four detained children undergo such experiences, violating the International Covenant on Civil and Political Rights and the Fourth Geneva Convention - both of which have been ratified by Israel. The previously detained children explain that the interrogations lasted for hours and that they were forced to sit on small iron chains and were not allowed to go to the toilet or sleep.

The report also includes the previously detained children's worst experiences such as being sexually humiliated and forced to strip completely and wait for hours while air conditioners were on high. A 14-year-old Palestinian, Abd al-Muti Salhab, has been detained twice by Israeli forces, first on Nov. 2013 and again in April 2014. The accusation against him was throwing stones at Israeli troops. During his second detention he was quoted in the report as saying, "I was placed with 10 others in a place which would accommodate a maximum of four people. After waiting for hours, I was interrogated. I told the officials that I could not hear them as I need a hearing aid, but they did not listen to me and beat me more. The interrogator said my cousin informed on me. When I denied he slapped my face. I was told that I would be released if I confessed my guilt. I did so. But I was sent to Ofer prison near Ramallah." His family was informed that he was in Ofer prison and had a hearing the same day. There was not enough time for the family to appoint an attorney. Although Israeli officials claimed that there would be someone during the hearing as his legal counsel, Salhab said there was nobody.

Similar to Salhab's case, 14-year-old Rasheed al-Resheq was detained and interrogated. During the interrogation he was told to strip off his clothes completely. He waited naked for 18 hours while the air conditioner was on. He was tortured with electricity and his shoulder was dislocated but he was not provided with complete treatment.

The majority of Palestinian children were deprived of receiving legal help, according to the report. "In most cases, Israeli authorities immediately interrogate detainees without waiting for the presence of an attorney. Israeli authorities also never allow children's parents to accompany them and do not inform them of the reasons for their detention.

Yet article 37 of the Convention on the Right of the Child states that youth and their parents must be informed of the reasons behind their detention, as well as allowed legal assistance." A report released by UNICEF in 2009 revealed that Israel bases its punishments on confessions after interrogators coerce children to admit to the charges claimed by Israeli forces.

The report says it is very common in Palestine to be arrested by Israeli forces without being informed of the reason why. One of the laws allowing security forces to detain someone who is carrying prohibited literature, which was made during the period of the British Mandate in1945, is still in effect. A person who was detained under this law can face three to 10 years of imprisonment. Israeli forces also detain anyone by claiming that they anticipated a security concern. Israeli security forces detain Palestinians on the basis of arbitrary or flexible laws, and therefore it is not easy to speak up against the oppression happening somewhere else.
Last Update: Aug 06, 2014 11:09 am
RELATED TOPICS