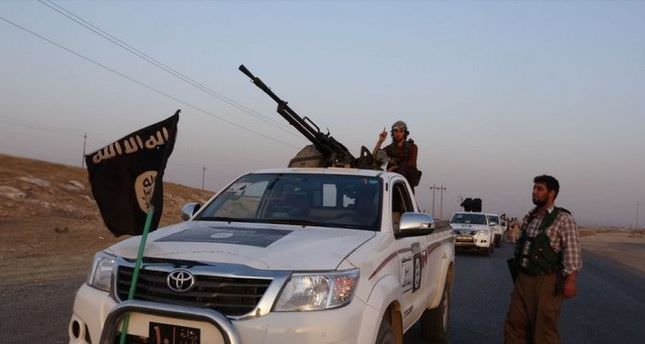 by Anadolu Agency Aug 07, 2014 12:00 am
ISIS militants mounted a bloody bid to seize Iraq's largest dam Thursday, clashing with Kurds for control of the Mosul's primary source of fresh water and power.

"The Islamic State of Iraq and Sham (ISIS) launched an attack on Mosul dam but the peshmerga repelled it," Kurdish spokesman Halgurd Hekmat said. "They left at least one body and four destroyed humvees behind in their retreat," he said.

The fight to control the 30-year-old facility once known as Saddam Dam marks a critical point in ISIS' front with the Kurdish soldiers known as Peshmerga. Seizing the dam would give ISIS the power to control water and electricity in Iraq's second largest city, Mosul, 30 miles downstream.

The dam lies on the Tigris River, which runs through Iraq's capital, Baghdad. It provides electricity to the 1.7 million residents of Mosul and is the fourth-largest dam in the Middle East.

ISIS has fought the local Kurdish peshmerga fighters for control of the dam for nearly one week.

At least three residents who live in the area spoke to The Associated Press on condition of anonymity, fearing for their own safety.

The government did not immediately comment on the developments. French Foreign Minister Laurent Fabius urged the United Nations Security Council to hold an emergency meeting over the situation, according to Reuters.

The Al-Qaeda-breakaway group is calling for the creation of an Islamic state in territory it controls in Iraq and Syria, imposing its own harsh interpretation of Islamic law. Iraqi government forces, Kurds and allied Sunni tribal militiamen have been struggling to dislodge the militants with little apparent success.

ISIS posted a statement online Thursday claiming that they had taken control of the dam and vowed to continue "the march in all directions," adding that it not given up the great Caliphate project." The group added that it has seized a total of 17 cities, towns and targets — including the dam — over the past five days. The statement could not be verified but it was posted on a site frequently used by the group.

Mosul fell to the militants on June 10. Fighting intensified in the region Sunday after the nearby towns of Zumar and Sinjar fell to ISIS as well.

The Kurdish peshmerga units had initially managed to stall the militant advances, but their defense waned in recent weeks.

On Monday, Iraqi Prime Minister Nouri al-Maliki ordered the Iraqi air force to provide aerial support to the Kurds, in a rare show of cooperation between Baghdad and the Kurdish regional government that underscored the serious nature of this crisis.

Iraq's second largest dam, Haditha Dam in the western Anbar province, has also been at risk of takeover but remains in the hands of the Iraqi military.

In Baghdad, Iraqi officials say a suicide car bomber rammed his explosives-laden car into a police checkpoint, killing at least 15 people. A security official said nine civilians were among the dead in Thursday's attack that took place in the predominantly Shiite northern neighborhood of Kazimiyah. He added that 26 other people were wounded.

A medical official confirmed the causality figure. Both officials spoke on condition of anonymity as they were not authorized to release information.

Pope Francis also is calling for world governments to take measures to protect Christians driven from their villages in northern Iraq and provide them with humanitarian aid.

The pope's second appeal in as many weeks came Thursday as militants overran a cluster of predominantly Christian villages alongside Iraq's semi-autonomous Kurdish region, sending tens of thousands of civilians and Kurdish fighters fleeing.

In a statement, Francis appealed to the international community to "put an end to the humanitarian drama underway, adopt measures to protect those who are threatened by violence and assure them necessary aid, especially urgent for those who are homeless and depend on the solidarity of others."