Biden and Barzani to discuss the rise of ISIS 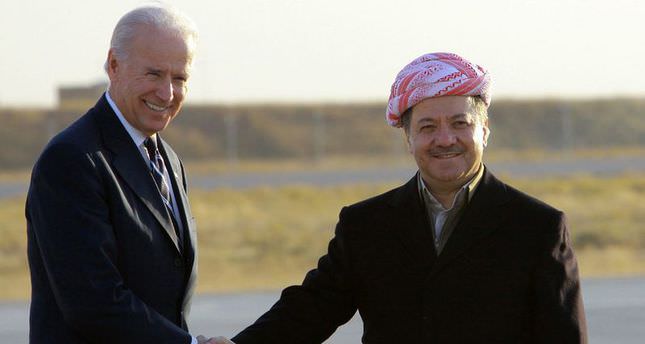 by AA Aug 08, 2014 12:00 am
The U.S. Vice President called Iraqi Kurdish Regional Government's President to discuss security in northern Iraq and the threat the self-proclaimed Islamic State of Iraq and Al-Sham (ISIS) poses to civilians.

Vice President Joe Biden offered his condolences for the Kurdish losses suffered during ISIS' advances, according to a statement released by his office.

Biden, reportedly, reaffirmed the U.S.' commitment to take whatever action is necessary to protect Americans in Erbil, including targeted airstrikes.

U.S. President Barack Obama, late Thursday, authorized U.S. forces to airdrop humanitarian aid to the people stranded in Mount Sanjar and to carry out airstrikes in case of any threat to Erbil and American facilities there.

Since last Saturday, the ISIS moved to the north of Iraq where violent clashes between ISIS militants and KRG forces Peshmerga took place. The recent ISIS activity has caused 5,000 refugees from Hazer camp in Erbil to be evacuated for their safety in fear of attacks.

Early Thursday, ISIS was reportedly took over Makhmour town in northern Iraq that is home to 12,000 Turkish Kurds.