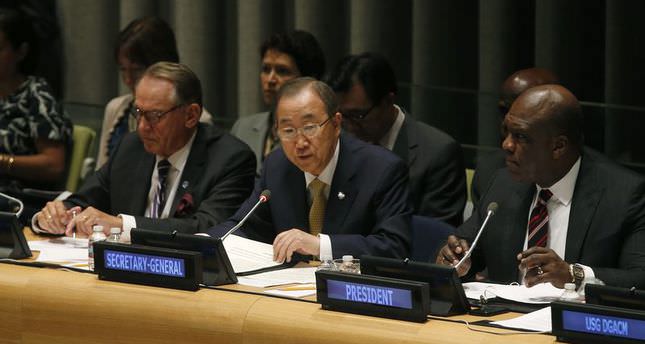 by Anadolu Agency Aug 08, 2014 12:00 am
United Nations chief Ban Ki-moon on Friday condemned the latest rocket attacks on Israel and called for a return to a ceasefire in Gaza.

The secretary general expressed his "deep disappointment" over the failure to extend the 72-hour truce that expired Friday and said peace talks in Cairo should continue.

Ban "condemns the renewed rocket fire towards Israel. More suffering and death of civilians caught up in this conflict is intolerable," said a statement from his spokesman.

"The extension of the ceasefire is absolutely essential for talks to progress."

Ban "firmly" called on the Palestinians and Israel "not to resort to further military action that can only exacerbate the already appalling humanitarian in Gaza."

Hamas and Israel after attempting three ceasefires with help from Turkey, U.S., Qatar and Egypt, agreed Tuesday on a 72 hour ceasefire, but Hamas stressed they have no interest in extending the ceasefire, arguing that Israel failed to meet its demands on Thursday, but on the other hand, Israel has expressed its readiness to extend the truce under its current terms.

On Friday, Israeli army resumed airstrikes on the Gaza Strip following the expiry of a three-day ceasefire with Palestinian factions. Friday's raids came shortly after Palestinian factions fired a barrage of rockets at Israel following the expiry of an Egyptian-brokered ceasefire. The ceasefire was brokered by Egypt following a month of incessant Israeli strikes against the Gaza Strip that left 1893 Palestinians dead and 9806 others injured. The attacks have also turned thousands of Gaza's buildings into rubble.