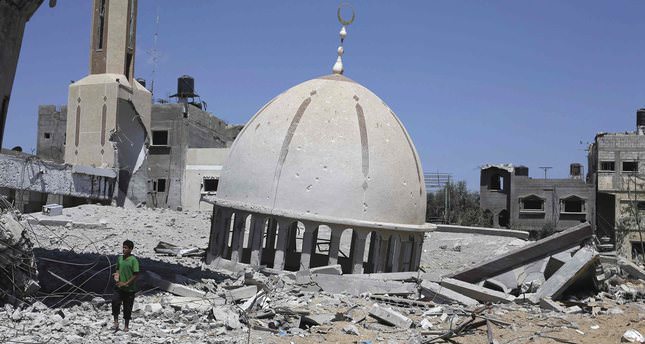 by AA Aug 09, 2014 12:00 am
Israel's warplanes early on Saturday shelled two central Gaza Strip mosques, but no human casualties were reported from the shelling.

The two mosques, which were located in Al-Nusayrat refugee camp, in the central part of the Gaza Strip, were totally destroyed by the strikes, an eyewitness told Anadolu Agency.

Earlier in the day, Israeli warplanes struck the southern Gaza City Hassan al-Banna mosque, totally destroying it and also causing major harm to surrounding buildings and homes, according to eyewitnesses.

Hassan al-Banna is the founding father of the Muslim Brotherhood movement. He was born in Egypt in 1906 and died in 1949.

The strikes against the three mosques did not leave any human casualties behind, Palestinian Health Ministry spokesman Ashraf al-Qodra told Anadolu Agency.

The Israeli army announced late on Friday that it had launched strikes against 50 targets in the Gaza Strip since a three-day humanitarian ceasefire came to an end early in the day.

Five Palestinians were killed by the Israeli strikes on Friday, while 25 others injured in different parts of the Gaza Strike, Palestinian medical and security sources said.

Israel had agreed in principle to extend the ceasefire to give the chance for Palestinian and Israeli negotiators in the Egyptian capital Cairo to reach a durable arrangement in Gaza.

Even with this, the Gaza-based Palestinian resistance movement Hamas turned down a ceasefire extension, saying the Israelis had presented the Palestinians nothing tangible in the Cairo talks until late on Thursday.

Israel's almost one month of attacks against the Gaza Strip before Friday had left 1886 Palestinians dead and more than 9800 others injured.

Around 64 Israeli troops were also killed in Gaza combat, while three civilians lost their lives to rocket attacks from the Gaza Strip.