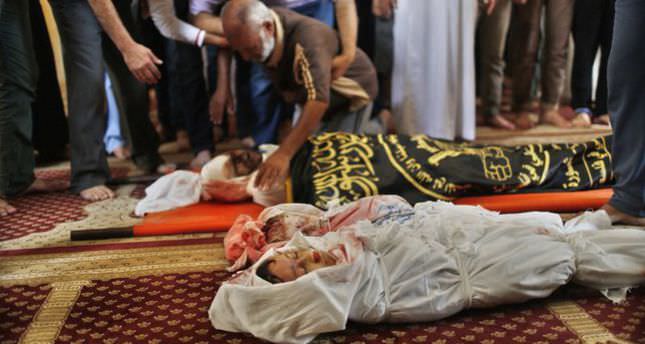 by AA Aug 11, 2014 12:00 am
A 45-day-old Palestinian infant girl on Monday succumbed to injuries sustained in an earlier Israeli attack on the Gaza Strip, raising the death toll from the Israeli onslaught against the Palestinian enclave-currently on pause-to 1940, a Palestinian health official has said.

At least 9886 Palestinians had also been injured during the Israeli offensive, he noted.

Israeli and Palestinian delegations are in Cairo for indirect talks hours after a new Egypt-brokered 72-hour ceasefire came into effect to look into the possibility of reaching a long-term ceasefire.

A first round of indirect talks that failed to make any headway stalled last week with Palestinian factions linking a ceasefire deal to Israel's approval of their conditions, including lifting a years-long blockade of the Gaza Strip and the establishment of a seaport.

Other demands also include allowing Gazan fishermen to ply their trade and freeing Palestinians recently detained by Israel.

Israel says "Operation Protective Edge"-one of its deadliest-ever offensives on the Gaza Strip-aims at halting rocket attacks from Gaza.