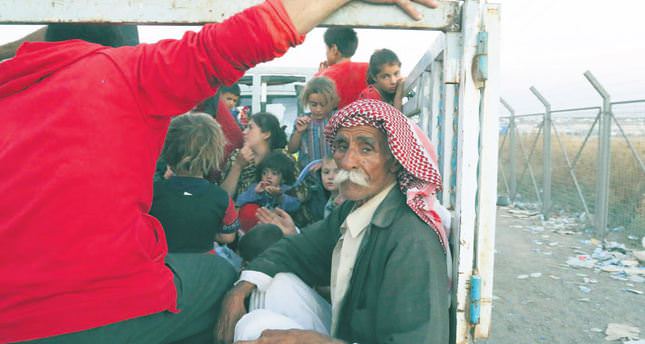 Despite the U.S. bombardment to stop the organization, ISIS, which has captured Yazidi areas, continues to kill members of the minority while thousands of Yazidis flee to safer areas

The U.S. has carried out a fourth wave of air strikes on the militants of the Islamic State of Iraq and al-Sham (ISIS) as the group continue to threaten the Kurdistan Regional Government (KRG), one of the U.S.' best allies in the region. In the third wave of air strikes, the U.S. military's Central
Command said in a statement on Saturday evening, "At approximately 11:20 a.m. EDT [02.20 p.m. GMT], a mix of U.S. fighters and remotely piloted aircraft struck one of two ISIS [Islamic State] armored personnel carriers firing on Yazidi [Ezidi] civilians near Sinjar, destroying the APC." The fourth
one came on Sunday near Irbil, the capital of Iraq's semi-autonomous Kurdish region.

The U.S. claimed that their attacks are aimed at preventing a further massacre against the Yazidi community by ISIS militants. After declaring their support for the attacks, British officials stated that as many as 150,000 people have become refugees around the Sinjar Mountain. French President Francis Hollande also expressed his support and added that France is ready to play its role in ending the humanitarian crisis. U.S. President Barack Obama said "I was very pleased to get the cooperation of both Prime Minister [David] Cameron and President Hollande in addressing some of the immediate needs in terms of airdrops and some of the assets and logistical support that they're providing," he said.

Obama added that the attacks against ISIS will be a long-term project and "there is going to be a counterterrorism element that we are already preparing for and have been working diligently on for a long time now."

According to an official from the Baghdad administration, ISIS militants have killed at least 500 Yazidis, burying some of their victims alive and kidnapping hundreds of women. Reuters reported that ISIS has turned some Yazidi villages into a massive grave.

Sinjar, the ancient home of the Yazidis and one of the towns captured by ISIS militants, is defenseless after Iraqi forces left the area while Kurdish troops have not been able to stop ISIS. Iraq's human rights minister Mohammed Shia al-Sudani told Reuters, "We have striking evidence obtained from Yazidis fleeing Sinjar and some who escaped death, and also crime scene images that show indisputably that the gangs of the Islamic States have executed at least 500 Yazidis after seizing Sinjar."
RELATED TOPICS