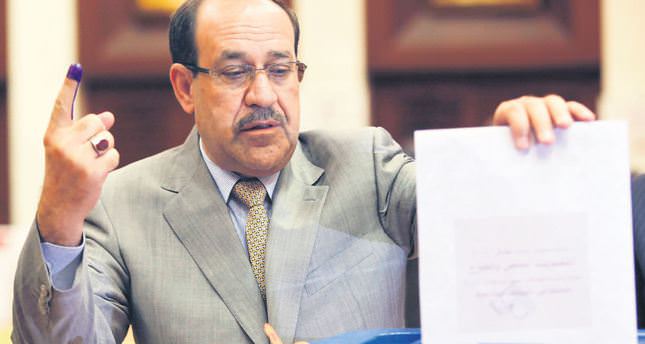 After al-Maliki declared that he will be candidate again and ordered the arrest of the recently-appointed President Fouad Massoum, Haidar al-Abadi was nominated for the prime ministry amid the deepening crisis

Iraqi President Fouad Massoum on Monday formally nominated Haidar al-Abadi a candidate to replace current Prime Minister Nouri al-Maliki. The nomination of Haidar al-Abadi, who is a member of Maliki's Shiite Islamist Dawa Party, came after Maliki declared that he will become candidate for the prime ministry again. The initial reports said that Maliki mustered his forces which were deployed in critical areas of Baghdad. Maliki accused the president of violating the constitution in a tough televised speech likely to deepen political tensions as insurgency rages. Special Forces loyal to Maliki were deployed on Sunday night in strategic areas of Baghdad, police said. Several police sources also said the forces had taken up positions at key entrances to the sprawling capital.

AL-Maliki, seen as an authoritarian and sectarian leader, has defied calls by Sunnis, Kurds, some fellow Shi'ites and regional power broker Iran to step aside for a less polarising figure who can unite Iraqis against ISIS militants. Deputy Assistant Secretary of State for Near Eastern Affairs Brett McGurk Tweeted Sunday evening that the U.S. supports Iraq's president.

Iraq's embattled Prime Minister Nouri al-Maliki, in a surprise speech late Sunday, accused the country's new president of violating the constitution, plunging the government into a political crisis at a time it is battling advances by ISIS (self-proclaimed Islamic State of Iraq and al-Sham) militants.
Al-Maliki is seeking a third-term as prime minister, but the latest crisis has prompted even his closest allies to call for his resignation. A parliament session scheduled for Monday to discuss the election and who might lead the next Iraqi government was postponed until Aug. 19. On Sunday night, in a nationally televised speech, al-Maliki declared he will file a legal complaint against the new president, Fouad Massoum, for committing "a clear constitutional violation."

Al-Maliki, whose Shiite-dominated bloc won the most seats in April elections, accused Massoum of neglecting to name a prime minister from the country's largest parliamentary faction by Sunday's deadline. He said the president has violated the constitution "for the sake of political goals." Al-Maliki, speaking on Iraqi TV for the first time since U.S. forces launched airstrikes and humanitarian airdrops in Iraq last week, said the security situation will only worsen as a result of Massoum's actions. "This attitude represents a coup on the constitution and the political process in a country that is governed by a democratic and federal system," al-Maliki said. "The deliberate violation of the constitution by the president will have grave consequences on the unity, the sovereignty, and the independence of Iraq and the entry of the political process into a dark tunnel.

The political infighting could hamper efforts to stem advances by ISIS militants who have seized a large swath of northern and western Iraq in recent weeks.

President Barack Obama warned Americans on Saturday that the new campaign to bring security in Iraq requires military and political changes and "is going to be a long-term project." Obama said Iraqi security forces need to revamp to effectively mount an offensive, which requires a government in Baghdad that the Iraqi military and people have confidence in. Obama said Iraq needs a prime minister an indication that suggests he's written off the legitimacy of the incumbent, al-Maliki.

Critics say the Shiite leader contributed to the crisis by monopolizing power and pursuing a sectarian agenda that alienated the country's Sunni and Kurdish minorities. After al-Maliki's speech, Brett McGurk, a deputy assistant secretary of state for Iraq and Iran, expressed support for Massoum. "Fully support President of Iraq Fuad Massoum as guarantor of the Constitution and a PM nominee who can build a national consensus," McGurk tweeted.
Last Update: Aug 12, 2014 10:13 am
RELATED TOPICS