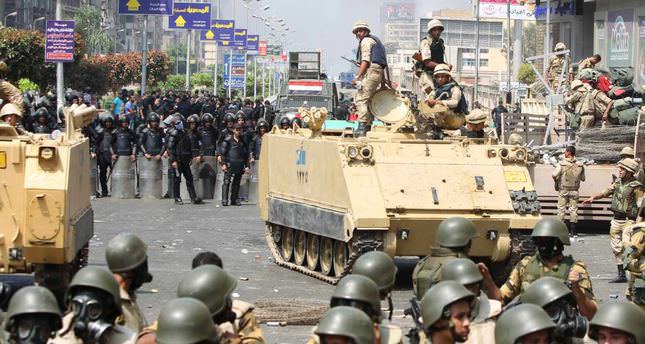 by AA Aug 13, 2014 12:00 am
An international campaign will be launched by Egyptian groups opposed to the country's current regime to coincide with the first anniversary of the killing of hundreds of supporters of ousted president Mohamed Morsi in Cairo's Rabaa al-Adawiya Square.

The initiative seeks to raise awareness about the incident with a view to advocating for the rights of the victims, campaign organizers said in a statement.

Hundreds of supporters of ousted president Mohamed Morsi were killed and thousands injured on August 14 of last year when security forces moved in to disperse their sit-in.

The sit-in was staged by those opposed to the elected leader's removal from office at the hands of Egypt's military establishment.

The watchdog even suggested the killings "likely" amount to crimes against humanity.

The organizers said the global campaign, dubbed "The Rabaa Story," aims to advocate at the international level for the rights of those killed and injured during what they described as the "Rabaa massacre."

They added that a dedicated website in both Arabic and English will offer a chronology of events from the Egyptian January 25, 2011 revolution until the Rabaa dispersal.

"There will also be promotional ads and special pages on social-networking websites," they added.

The campaign organizers said several TV channels, including a new one that would be launched on the anniversary day, would broadcast material related to the bloody dispersal.

Called "Egypt Now," the new channel aims to replace the Muslim Brotherhood-linked "Egypt 25" and "Ahrar 25" channels, both of which were shut down by the authorities upon Morsi's ouster on July 3 of last year.

Sources said a number of TV channels opposed to the current regime planned to make joint broadcasts on Thursday to coincide with the Rabaa anniversary.

The broadcast would include news bulletins, coverage of relevant activities and political discussions.

The April 6 youth movement, which opposes the current regime and Morsi's Muslim Brotherhood, has launched a new hashtag-"Rabaa a Massacre"-on Facebook.

The movement said it launched the hashtag in solidarity with "blood, rights and freedoms."

It did not, however, say whether it planned to participate in any of the planned Rabaa-related activities on Thursday.

Along with the new hashtag, April 6 also replaced its profile photo with that of Asmaa al-Beltagi, the young daughter of a leading Muslim Brotherhood member who was killed during the sit-in dispersal.

"This [gesture by April 6] is a humane move that reflects increasing awareness of the massacre that took place that day," Sanaa Abdel-Gawad, Asmaa's mother, told Anadolu Agency.

She expressed hope that opponents of Morsi's ouster would join forces to stand up for the rights of the victims of the sit-in dispersal, including her slain daughter.

The April 6 movement first appeared in 2008 to oppose the policies of former president Hosni Mubarak.