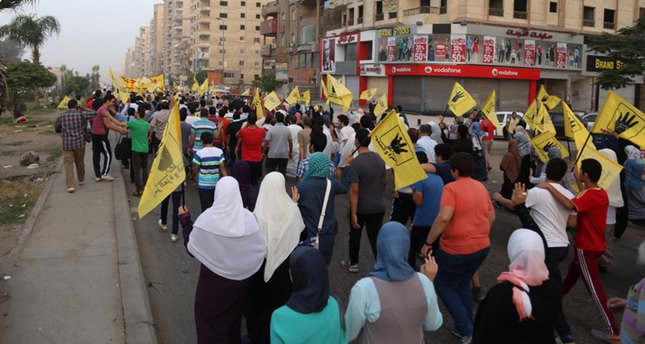 by AA Aug 14, 2014 12:00 am
Egyptian security forces intensified their presence in major streets Thursday morning as supporters of ousted president Mohamed Morsi prepared to mark the passage of one year since the deadly dispersal of their protest encampments.

"Security forces have been put on high preparedness since early morning at many streets and around vital establishments as well as police stations and prison facilities," Hani Abdel-Latif, spokesman for the Egyptian Interior Ministry, told Anadolu Agency.

"Thus far, there have been no attacks or chaos," he added.

Short of blocking them, police and army forces reinforced deployments around Cairo's Rabaa and Nahda Square, where hundreds of pro-Morsi protesters were killed in an hours-long dispersal by security forces.

In central Cairo's iconic Tahrir Square, security forces set up barricades and barbed wires around the entrances and deployed five tanks around the Egyptian Museum.

Security forces also tightened up measures at the main entrances to Cairo, searching cars suspected to be boarding Morsi supporters who might be heading to the capital to take part in protests called for by the National Alliance for the Defense of Legitimacy-Morsi's main support bloc.

A military source said that 6,000 troops have been deployed to secure the southern entrance to the strategic Suez Canal waterway in northeast Egypt.

Security forces and army tanks have also been deployed in major streets in Suez city.

Morsi, a Muslim Brotherhood leader who won Egypt's first free presidential election in 2012, was removed from office by the military last year following protests against his single year in power.