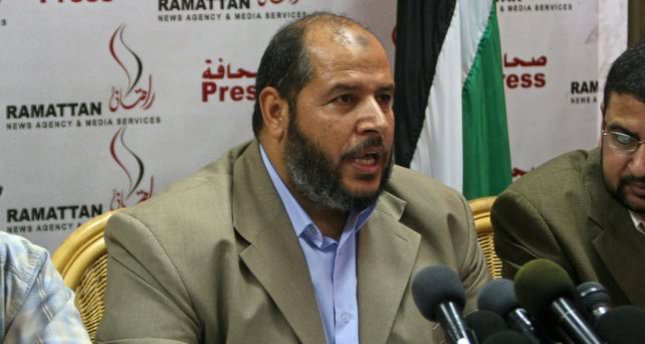 by AA Aug 14, 2014 12:00 am
A leading member of Palestinian faction Hamas on Thursday blamed Israel for the failure to reach a comprehensive ceasefire agreement between the two sides.

"We could have signed a ceasefire deal on Tuesday if it hadn't been for Israel's manipulation of language," said Khalil al-Haya, leading Hamas figure and member of the Palestinian delegation indirectly negotiating a ceasefire with Israel in Cairo.

"This was why we accepted a temporary calming [as opposed to a formal ceasefire per se]-to offer a chance for consultations and ratchet up pressure on the enemy," al-Haya said at a press conference held at Gaza City's Al-Shefaa Hospital.

Palestinian and Israeli negotiators fell short of signing a permanent deal on Tuesday, one day before the expiry of a temporary three-day truce.

The three-day cessation of hostilities followed more than a month of devastating Israeli attacks on the Gaza Strip that have left 1955 Palestinians dead and more than 10,000 others injured.

Al-Haya described the Cairo talks as both "tough" and "daunting," adding: "The Israelis are well-versed in procrastination."

He went on to say that Egyptian mediators had striven to bridge the gap between the Palestinian and Israeli positions.

Al-Haya told Anadolu Agency that Israel had previously signed protocols with the Palestinian Authority for an airport and seaport in Gaza, urging the self-proclaimed Jewish state to respect its commitment to these agreements.

"The Israelis must stop their manipulation of language if a ceasefire agreement is to be reached," he said.

He asserted that the Palestinian side had shown the flexibility needed to hammer out a ceasefire deal.

Al-Haya added that Palestinian negotiators had received a message from Egyptian intelligence chief Mohamed al-Tohami that Egypt would facilitate operations at the Rafah border crossing linking the Gaza Strip to Egypt's Sinai Peninsula.

The Palestinian delegation to the talks arrived in Gaza earlier Thursday from Cairo after both sides agreed to extend the temporary ceasefire by another five days.