Hamas blames Israel for not yet reaching a permanent Gaza truce 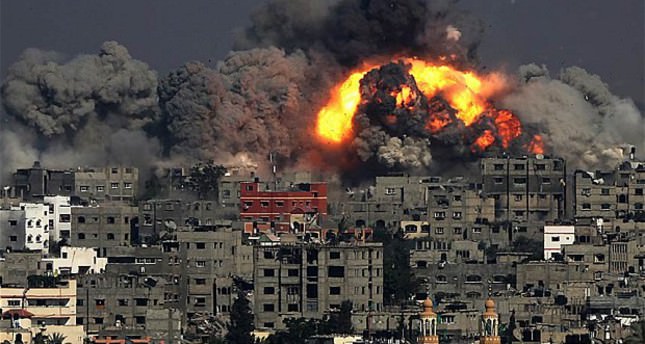 by Daily Sabah Aug 16, 2014 12:00 am
As the five-day Gaza truce entered into force on Thursday, Hamas negotiators sent positive signals toward establishing a more permanent truce on the condition of "fulfill[ing] what the Palestinian people aspire for," saying that Hamas is "not interested in a confrontation." Hamas negotiator Khalil al Hayya told reporters in Gaza after the latest Cairo talks with Israel took place on Thursday that Palestinian factions still see "a real opportunity" for a more comprehensive ceasefire agreement to end the Gaza war.

Following the indirect talks, senior Hamas leader Moussa Abu Marzouq left Egypt Friday to brief Hamas political chief Khaled Meshaal on the outcome of the continuing truce talks. The Palestinian delegation wants the eight-year-old Israeli blockade of the territory to be lifted, an extension of the strip's maritime and security boundaries and the building of a seaport and reopening of an airport in the Palestinian enclave. The Israeli delegation rejects the Palestinian delegation's demands while demanding the full demilitarization of Gaza. Reaching a more permanent and comprehensive Gaza truce would require further talks until both sides are able to secure compromises.

Since the Egyptian-mediated talks were launched, no party would ever get everything it demands. During the four-week-long Gaza war, the Palestinian death toll from Israel's Gaza onslaught rose to 1,959, mostly unarmed civilians, according to the Palestinian Health Ministry. At least 425,000 displaced people in the Gaza Strip are in emergency shelters, according to the U.N., and nearly 12,000 homes have been destroyed or partially damaged by Israeli air strikes while leading to worsening humanitarian conditions in the enclave.

Meanwhile, a 91-year-old Dutch man, Henk Zanoli, who was awarded Israel's "Righteous among the Nations" title for saving a Jewish boy from the Holocaust during World War II returned the medal after his six relatives were killed during the Israeli military assault on the besieged Palestinian territory. "It is particularly shocking and tragic that today, four generations on, our family is faced with the murder of our kin in Gaza. The murder was carried out by the State of Israel," he said in his letter to the Israeli ambassador to the Netherlands, which was published by Haaretz newspaper on Friday. This honorific title was given by Israel to people who risked their lives to save Jewish people from being exterminated by the Nazis.
Last Update: Aug 16, 2014 1:33 am
RELATED TOPICS