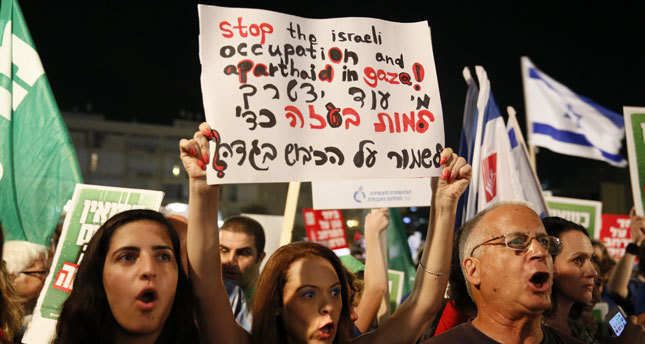 As thousands of Israeli demonstrators gathered in Tel Aviv to call for peace in Gaza, no truce has yet been reached amid indirect talks in Egypt's Cairo that still continue on volatile ground

Thousands of Israelis gathered in Tel Aviv over the weekend to call for an end to Israeli military's deadly assault on the Gaza Strip as well as an end to the blockade. Meanwhile, as the five-day cease-fire ends, there is no sign of a long-term deal between Israel and Hamas to end the violence.

As the current five-day truce between Israel and Palestinian factions is set to expire on Monday night, no results have emerged yet during indirect talks over a long-term arrangement to end more than a month of bloodshed in Gaza. Any longterm cease-fire in Gaza emerging from the indirect talks in Cairo looks difficult to achieve as the two sides have yet to agree to each other's demands. Israeli Prime Minister Benjamin Netanyahu pointed out at the weekly cabinet meeting in Jerusalem that Israel's security needs have to be met in order to reach a long-term cease-fire in Gaza. "From the first day, the Israeli delegation to Cairo has worked under clear instructions: insist on the security needs of the State of Israel. Only if there is a clear response to our security needs will we agree to reach understandings," PM Netanyahu said. "The Israeli delegation in Cairo is acting with a very clear mandate to stand firmly with Israel's security needs," he added.

In response to Netanyahu's remarks, Hamas spokesman Sami Abu Zuhri stated that "The only way to achieve security is to offer security to the Palestinians first and to lift the blockade and to agree to their demands," while calling on Israeli negotiators to accept its demands on an urgent basis.

Palestinian and Israeli negotiators arrived earlier Sunday in Cairo to resume the indirect talks over a long-term cease-fire to end the Gaza war. The negotiations between Israeli and Palestinian representatives have continued without making any significant progress to reach a long-term cease-fire agreement for a definitive end to the four-week-long Gaza war. After both sides engaged in the indirect talks mediated by Egypt last Monday, there has been no agreement reached yet. The attempts to resume peace talks over the past decade have led to no further progress on ending the ongoing conflict. The negotiations between Israeli and Palestinian officials for a solution to the decades-long conflict based on a territorial compromise have broken down due to mutual accusations of violations in implementing key aspects of the agreements.

As the Palestinian negotiators stick to Hamas' demands, including the lifting of the eight-year Israeli blockade of the territory, which include an extension of the strip's maritime and security boundaries and the building of a sea port and reopening an airport in the Palestinian enclave has been rejected by the Israeli negotiators demanding a full-demilitarization of Hamas and the enclave. Sami Abu Zuhri, the Hamas spokesman in Gaza, said in a statement that the "ball is in Israel's court [with regard] to reaching an agreement ... the Palestinian factions are ready for any possibility and still stick to its demands and requirements."

Palestinian President Mahmoud Abbas addressed the Egyptian-proposed cease-fire agreement as "the only way to resolve the crisis" to reach a long-term truce in Gaza. As the resumed talks have not lead to any progress to put an end to the Gaza war, whether an extension of a cease-fire in the Gaza strip would be decided remains highly controversial. The current Gaza truce is due to expire on midnight Monday. Wassel Abu Youssef, senior member of the Palestine Liberation Organization, stated "the delegation would decide on that depending on the progress of the talks," as the Anadolu Agency (AA) reported.

Meanwhile, thousands of Israeli demonstrators gathered in Tel Aviv's Rabin square on Aug. 16 to call for an end to Israel's deadly military campaign in Palestinian territories. Regarding security concerns in Israeli territories, Israel have stated that "no military solution for the conflict between Hamas and Israel" would bring peace to the territory, as "the people in Israel will not be able to live safely until the siege on Gaza is lifted."

During a month of Israeli attacks on the Palestinian territory, the Palestinian death toll has nearly reached 1,980, mostly including unarmed civilians and children, with 10,000 others reportedly injured. Apart from killing hundreds of Palestinians, at least 425,000 displaced people in the Gaza Strip are in emergency shelters, according to the United Nations, and nearly 12,000 homes have been destroyed or partially damaged during Israeli air raids, leading to worsening humanitarian conditions in the enclave.
Last Update: Aug 18, 2014 9:51 am
RELATED TOPICS