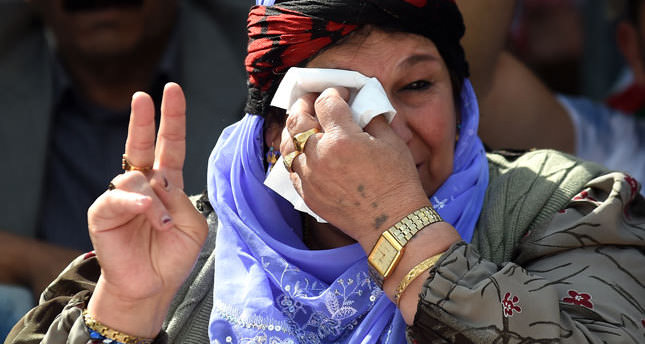 by Daily Sabah Aug 18, 2014 12:00 am
The Islamic State of Iraq and al-Sham (ISIS) continues to terrorize the region despite airstrikes conducted by the U.S. According to reports, the U.S. airstrikes have narrowed ISIS's maneuverability. The Kurdish peshmerga have seized some parts of Mosul dam after the U.S. conducted airstrikes near the dam. "The nine air strikes conducted thus far destroyed or damaged four armored personnel carriers, seven armed vehicles, two Humvees and an armored vehicle," the U.S. Central Command said in a statement. U.S. officials expressed last week that the siege in the Sinjar Mountain was also broken. But ISIS continues its brutal attacks on the Yazidis, an ethno-religious minority group, and killed at least 50 over the weekend. Kurdish forces belonging to different factions like the PKK and the YPG united to fight against ISIS but they have not made huge progress apart from stopping ISIS's advance.

Thousands of people on the weekend gathered in Irbil to call the world to stop ISIS. U.K. Prime Minister David Cameron shared a similar idea with the protesters and said "Britain should use its military prowess to tackle ISIS militants in Iraq and they have to be stopped from creating a terrorist state on the shores of the Mediterranean. "If we do not act to stem the onslaught of this exceptionally dangerous terrorist movement, it will only grow stronger until it can target us on the streets of Britain. We already know that it has the murderous intent," Cameron wrote in an article for Britain's Sunday Telegraph newspaper.

The U.N. Security Council on Friday unanimously adopted a resolution aimed at weakening ISIS in Iraq and Syria. The resolution, under Chapter VII of the U.N. charter, allows the use of "all necessary measures" to "suppress the flow of foreign terrorist fighters" to Iraq and Syria, where ISIS has made widespread advances during which it has been accused of committing atrocities.

Meanwhile, in Syria, ISIS has executed 700 people from a tribe, according to the Britain-based Syrian Observatory Group for Human Rights. The group said that reliable sources reported that beheadings were used to execute many of the al-Sheitaat tribe, which is from the Deir al-Zor province. The head of the al-Sheitaat tribe, Sheikh Rafaa Aakla al-Raju, called in a video message on Sunday for other tribes to join the fight. "We appeal to other tribes to stand by us because it will be their turn next. If ISIS is done with us the other tribes will be targeted after al-Sheitaat. They are the next target," he said in the video which was posted on YouTube.

ISIS was once part of al-Qaeda but was disowned by the organization due to its aggressive stance against other opposition groups in Syria, including al-Qaeda's official Syrian branch, Jabhat al-Nusra. Other opponent groups accuse ISIS of undermining the legitimacy of their struggle against the Syrian regime.
Last Update: Aug 18, 2014 2:03 am
RELATED TOPICS