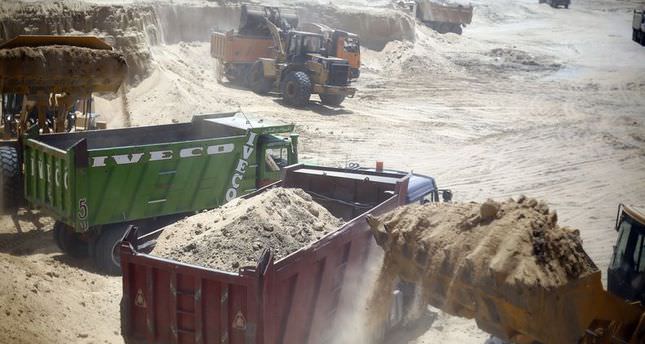 by AA Aug 19, 2014 12:00 am
An Egyptian-Bahraini consortium has been declared the winner of a bid to draw up the master plan for Egypt's Suez Canal development project.

The winning bid is worth some $1.8 billion, he noted.

The consortium is now expected to submit its master plan for the project within six months so it might be subject to "societal debate" for two months before work can begin on project infrastructure, Mamish said.

One of Egypt's most high-profile development projects, the Suez Canal Corridor Development is expected to economically revitalize Egypt's canal zone, turning it into an international logistical and industrial hub.

The announcement came two weeks after Abdel-Fattah al-Sisi announced that Egypt would dig a $4-billion, 72km waterway-to run parallel to the Suez Canal-to facilitate maritime traffic between the Red and Mediterranean seas.

Mamish said the Egyptian army would dig the new canal within three years. This, however, was later reduced to one year upon al-Sisi's orders.

As a result of the project, a number of factories and service projects are expected to be set up in the area, creating new sources of foreign currency.

The project was first floated by the government of ousted president Mohamed Morsi, but had met objections from Egypt's military, which had cited concerns at the time over "national security."
Last Update: Aug 20, 2014 9:57 pm
RELATED TOPICS