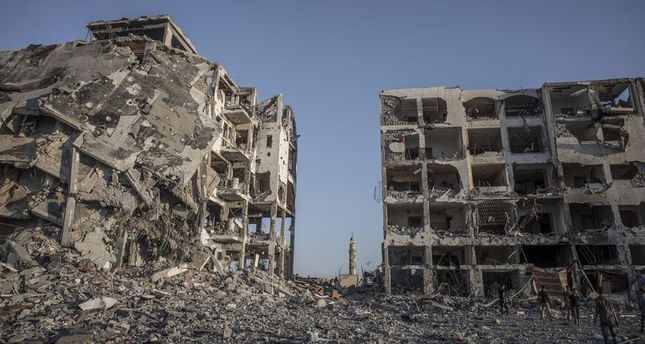 by AA Aug 19, 2014 12:00 am
Israeli army launched several airstrikes in the Gaza Strip on Tuesday after caliming a rocket fire from the blockaded Palestinian territory despite a temporary ceasefire.

"Following renewed rocket attacks at Israel earlier this evening, amidst the ceasefire, the IDF [army] is currently targeting terror sites across the Gaza Strip," the army said in a statement.

The army earlier said Tuesday that three rockets were fired from the Gaza Strip into southern Israel, despite a temporary ceasefire with Palestinian factions, which is set to expire on Tuesday midnight.

"This continued aggression will be addressed accordingly by the IDF," army spokesman Peter Lerner said.

"We will continue striking terror infrastructure, pursuing terrorists, and eliminating terror capabilities in the Gaza Strip, in order to restore security for the State of Israel," he added.

A five-day ceasefire in the Gaza Strip between Palestinian factions and Israel expired on Monday, but the two sides agreed to extend the lull by 24 hours as part of Egyptian efforts aimed at reaching a permanent deal.

The ceasefire came following more than a month of devastating Israeli attacks on the besieged Gaza Strip, which have left at least 2016 Palestinians dead-the vast majority of them civilians-and more than 10,000 injured.

Palestinian casualties from the current offensive alone have surpassed the combined Palestinian death toll from two previous operations, including Israel's highly-destructive "Operation Cast Lead" in 2008/9 in which some 1500 Palestinians were killed over the course of three weeks.

According to Israeli figures, at least 64 Israeli soldiers have been killed in battles with Palestinian fighters in Gaza-the highest military death toll for Israel of any of its three onslaughts on the territory.