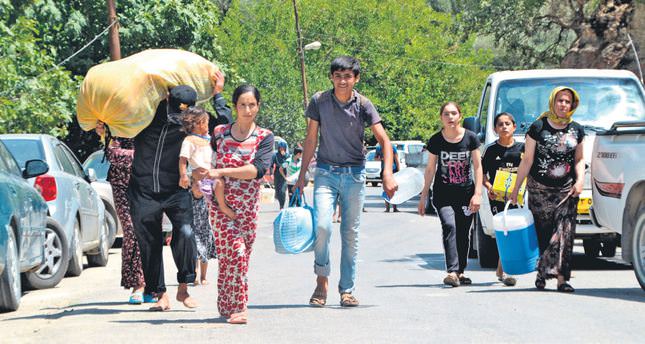 Kurdish forces and Iraqi troops pushed out ISIS militants and gained control of the Mosul dam as the U.S. continues airstrikes. However, the ISIS threat has not been eradicated from the region as heavy clashes continue

Firefights are raging around the Mosul dam between Kurdish forces and Islamic State of Iraq and al-Sham (ISIS) militants. According to the reports from the region, the Kurdish peshmerga and Iraqi counterterrorism forces seized the dam. However, some Twitter accounts loyal to ISIS said that clashes are still continuing, and that ISIS still controls some parts. Iraqi state TV also said Iraqi forces and Kurdish troops had retaken the Mosul Dam from ISIS militants. The Mosul Dam, spanning the Tigris River just north of Iraq's second-largest city of Mosul and its broader complex, hold great strategic value as they supply electricity and water to a large part of the country.

Alarmed by the militants' advance, the U.S. and Iraqi airstrikes pounded the area over the past two days. The U.S. military said its forces conducted nine strikes on Saturday and another 16 on Sunday in efforts to help the Iraqis retake the dam. Iraqi army spokesman Lt. Gen. Qassim al-Moussawi said that Kurdish peshmerga forces and Iraqi antiterrorism troops "fully liberated" the dam on Monday, and "hoisted the Iraqi flag over it." Moussawi added that the troops were backed by joint aerial support, but he did not specify whether there were any U.S. airstrikes in the area of the dam on Monday.

The U.S. airstrikes have been very efficient in forcing ISIS to retreat. U.S. President Barack Obama authorized the military to conduct airstrikes around the Mosul dam on Aug. 14, and provide support to Iraqi forces while combatting ISIS militants. "These military operations will be limited in their scope and duration as necessary to support the Iraqi forces in their efforts to retake and establish control of this critical infrastructure site, as part of their ongoing campaign against the terrorist group, ISIS. The failure of the Mosul Dam could threaten the lives of large numbers of civilians, endanger U.S. personnel and facilities, including the U.S. Embassy in Baghdad, and prevent the Iraqi government from providing critical services to the Iraqi populace," Obama said in a released statement.

Kurdish forces previously retook control of Makhmour, and aim to capture the Sinjar Mountain where thousands of minority Yazidis are trapped and suffering. Yazidis have been subjected to ISIS brutality due to their religious beliefs. While ISIS killed hundreds of Yazidis, thousands had to flee to safer areas including the Kurdish region and Turkey.

U.K. Defense Minister Michael Fallon told The Times newspaper, "This is not simply a humanitarian mission." Warning that the operation could last for months, Fallon was reported as saying that British Royal Air Force Tornado military jets and a spy plane were flying further into Iraq beyond the focus area of the humanitarian crisis in the Kurdistan region to gather information on ISIS forces.

U.K. Prime Minister David Cameron warned the world of the growing ISIS threat and the possibility of the emergence of a terrorist state in the region. In an article he said, "We need a tough, intelligent and patient long-term approach that can defeat the terrorist threat at source." Describing the group's ideology as "poisonous," "extremist" and "barbaric," Cameron said that the threat could not be prevented by "airstrikes alone."
Some 1.5 million people have been displaced by fighting in Iraq since ISIS's rapid advance began in June. The scale of the humanitarian crisis prompted the U.N. to declare its highest level of emergency last week.