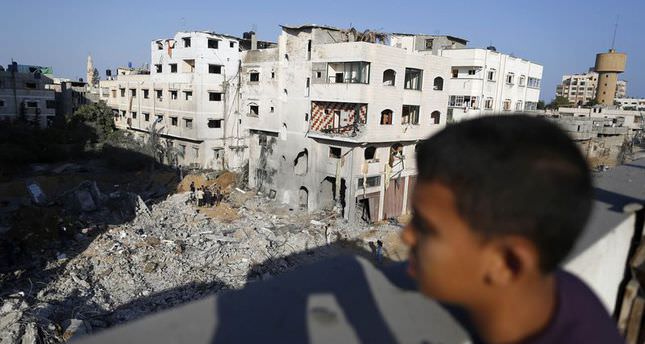 by AA Aug 20, 2014 12:00 am
Eleven Palestinians, including four children, were killed in Israeli attacks since the collapse of indirect talks for a durable Gaza ceasefire late Tuesday, a Palestinian Health Ministry official has said.

"The new victims raise to 2030 the number of Palestinians killed since the beginning of the Israeli operation against the Gaza Strip on July 7," Health Ministry spokesman Ashraf al-Qodra told Anadolu Agency Wednesday.

He said eight members of the same family, including three young brothers and a pregnant woman, were killed in an Israeli strike at a home in the eastern part of the central Gaza Strip town of Deir Al-Balah in the early hours of Wednesday.

Three other Palestinians, including a girl, were killed and a 53-year-old man injured in a series of Israeli strikes and artillery shelling of different Gaza Strip areas, added al-Qodra.

He asserted that more than 10,000 Palestinians have been injured in devastating Israeli attacks on the besieged coastal enclave since July 7.

Israeli and later Palestinian negotiators had left the Egyptian capital Cairo after the collapse of indirect talks for a permanent ceasefire in the Gaza Strip.

Israel claims that it had pulled its delegation after rocket attacks from Gaza on different parts of Israel on Tuesday.

The Israeli army then launched several strikes on the besieged coastal enclave, home to more than 1.8 million people.

Hamas has denied any knowledge of the rocket attacks and accused Israel of seeking to undermine the indirect talks.

Cairo had been the scene of indirect Palestinian-Israeli talks on a permanent ceasefire in the Gaza Strip since early August.