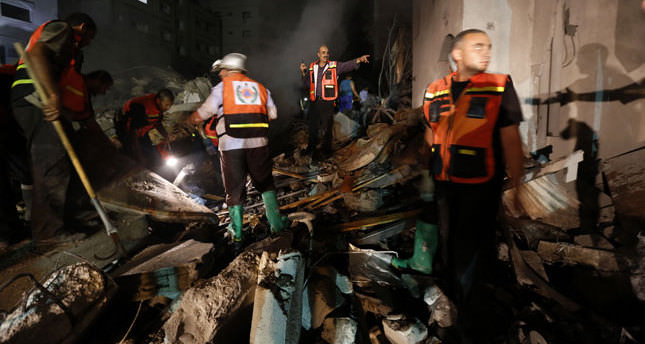 by Daily Sabah Aug 21, 2014 12:00 am
Soon after the collapse of the truce talks in Egypt, Israeli military resumes its air strikes against the Gaza Strip, killing 19 Palestinians, including five children, increasing the death toll since July 7 to 2,036. Israel's strike at Hamas leader Mohammed Deif killed his wife and children.

Following the failure of Egyptianbrokered talks late Tuesday, Israel resumed its deadly assault on Gaza, killing 19 Palestinians, including five children and 120 injured. After the Israeli military operation resumed, the Palestinian death toll rose to 2,036 since the launch of Israel's "Operation Protective Edge" on July 7, according to a statement from the Palestinian Health Ministry.

During the fresh strikes starting from Tuesday night, the Israeli military carried out some 60 airstrikes on Gaza, targeting first Hamas military leader Mohammed Deif's house in northern Gaza and killing his wife and children. "Deif deserves to die just like bin Laden. He is an arch murderer, and as long as we have an opportunity we will try to kill him," Israeli Interior Minister Gideon Saar told army radio, according to the AFP news agency.

As the Israeli airstrikes intensified, the Palestinian border authority stated that the Rafah crossing on the border between Egypt and the Gaza Strip would be shut down due to security concerns. "Activity was suspended in the [Rafah] crossing's outer hall due to Israeli strikes in the vicinity," Gaza Strip Border Authority Chairman Maher Abu Sabha told the Anadolu Agency (AA). Since the heavy Israeli assault was launched, the Egyptian government left the crossing open for only one day during the first days of the Israeli assault on Gaza.

During the 10-day period of calm, the peace talks stalled with no significant progress to reach a long-term cease-fire agreement for a definitive end to the four-week long Gaza war. After both sides engaged in indirect talks mediated by Egypt with uncertainty, the negotiations between Israeli and Palestinian officials for a solution to the decades- long conflict based on territorial compromise broke down many times due to mutual accusations of violations, as both sides rejects each other's demands. Israel, whose main objective is to get Gaza to demilitarize, rejects Hamas' primary demand of lifting the Gaza blockade. As the Cairo talks ended, UN Secretary-General Ban Ki-moon condemned the failure of the peace talks, while urging both sides not to escalate the tension.

The cease-fire was first broken by three rockets fired from the Gaza Strip just hours before the truce was to expire at midnight on Tuesday. During the Israeli assault on Gaza, tens of thousands of Palestinians have faced a deteriorating humanitarian situation.

Much of Gaza's territory has been affected by evacuation warnings or declaration of "no-go zones" by the Israeli military, causing many Palestinians to seek refuge in safer areas. Apart from the killings, at least 425,000 displaced people in the Gaza Strip are in emergency shelters, according to the U.N., and nearly 12,000 homes have been destroyed or partially damaged during Israeli raid.
Last Update: Aug 21, 2014 9:22 am
RELATED TOPICS