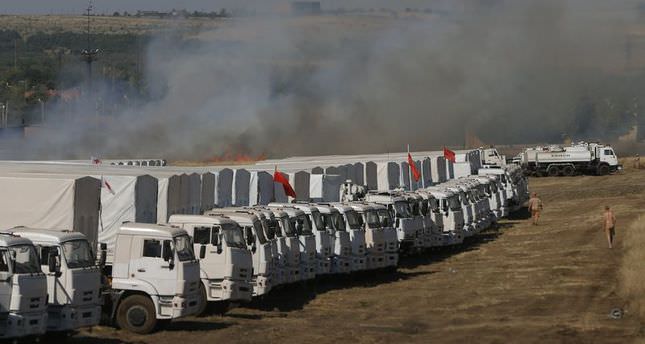 by Aug 21, 2014 12:00 am
Ukrainian authorities have delayed the delivery of Russian aid to eastern Ukraine, but efforts are under way to allow the stalled convoy to proceed, the International Committee of the Red Cross said on Thursday.

The convoy has been stuck at the Russia-Ukraine border for a week because Ukraine is worried that it could be used to deliver military supplies to pro-Russian separatists. Moscow says the mission is purely humanitarian and intended for civilians trapped by the conflict.

The ICRC, an independent aid agency, has sent 35 staff to help smooth the way for the roughly 260 Russian trucks parked near Rostov. It had expected cargo inspections to begin late Wednesday, before the convoy headed into rebel-held Luhansk in eastern Ukraine.

"An ICRC team visited Luhansk (on Wednesday) to check the roads and establish contacts for the delivery of the convoy, having received security guarantees for the mission," ICRC spokesman Ewan Watson told Reuters in Geneva on Thursday.

"Local authorities" in Luhansk, a city held by the separatists, have made preliminary arrangements to receive the Russian convoy, he said. The ICRC then called for the immediate inspection of the trucks in order to proceed as soon as possible, he added.

"Last-minute decisions from the Ukrainian side have delayed the process," Watson said, declining to elaborate. "We hope all issues can be resolved shortly."

Luhansk has been largely cut off for weeks and is without water and regular supplies of electricity, which have hit mobile and landline phone connections.

Heavy shelling hit residential neighbourhoods in Ukraine's rebel stronghold of Donetsk and government forces fought street battles in other towns on Wednesday as they sought to crush a four-month-old separatist rebellion.

The forces of the Western-backed Kiev government are steadily gaining the upper hand over the separatists in Russian-speaking eastern Ukraine and are tightening the noose around the main rebel bastions of Donetsk and Luhansk.