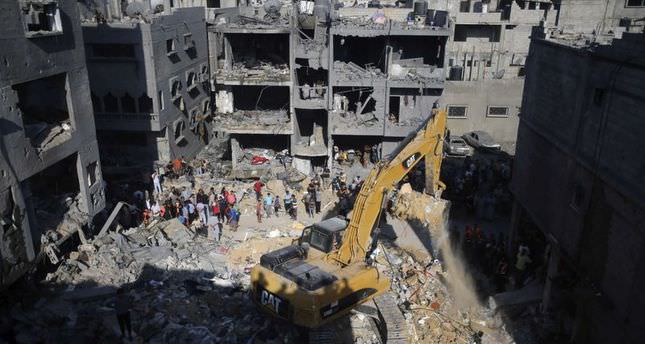 by AA Aug 22, 2014 12:00 am
Two Palestinians were killed in Israeli shelling in the central Gaza Strip on Friday, a Health Ministry spokesman said.

"The two were killed in the shelling that targeted an animal farm in the central Gaza Strip," Ashraf al-Qodra told Anadolu Agency.

According to eyewitnesses, the Israeli attack caused heavy damage to the farm and nearby houses.

The latest fatalities bring to 2088 the number of Palestinians killed in relentless Israeli attacks on the Gaza Strip since July 7.

Israel resumed airstrikes in the Gaza Strip on Tuesday following the collapse of indirect, Egypt-hosted talks aimed at hammering out a permanent ceasefire deal.

Israel accuses Palestinian factions of violating a temporary ceasefire (which expired on midnight Tuesday)-a claim denied by resistance faction Hamas, which in turn accused the self-proclaimed Jewish state of attempting to derail talks in Cairo.

Since hostilities began on July 7, at least 67 Israelis-64 soldiers and three civilians-have been killed, according to Israeli figures.