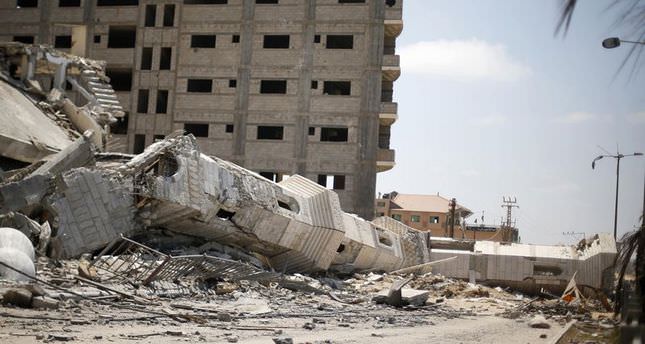 by AA Aug 22, 2014 12:00 am
Israeli planes early on Saturday launched a strike against a mosque in the southern Gaza Strip city of Khan Younis, but no human casualties were reported from the attack.

The attack turned, however, the eastern Khan Younis mosque to rubble and caused damage to surrounding homes and buildings, eyewitnesses said.

Palestinian Health Ministry spokesman Ashraf al-Qodra told Anadolu Agency that the attack on the mosque did not leave any human casualties behind.

Israel has totally destroyed around 100 mosques in the Gaza Strip since July 7, according to the Palestinian Ministry of Endowments.

Apart from destroyed mosques, Israeli aerial, ground and naval attacks on the coastal Palestinian territory had left 2091 Palestinians dead so far and around 10,500 others injured.

Thousands of homes throughout the beleaguered territory, meanwhile, have been partially or completely destroyed by relentless Israeli bombardments.

Since 2007, the coastal strip has reeled under an almost-airtight Israeli embargo, which has badly affected its economy and the livelihoods of its roughly 1.8 million inhabitants.